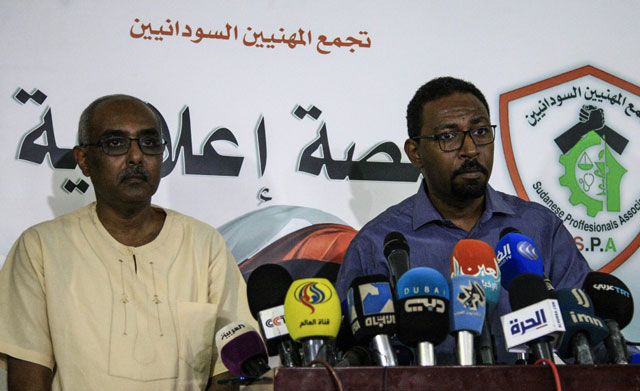 Khartoum, Sudan | AFP | Sudanese mediators have proposed two transitional bodies in a bid to break a deadlock in talks on a power handover from the military rulers to civilians, a protest leader said Sunday.

The army and protesters are wrangling over how to replace the existing 10-member military council that took over after the generals ousted president Omar al-Bashir on April 11.

The two sides agreed on forming a joint military-civilian last week, but have failed to hammer out the details on the makeup of the body.

Now a group of mediators including businessmen, journalists and other prominent figures from Sudanese society are trying to come up with other solutions.

“There is a proposal to have two councils, one led by civilians and the other by the military,” said Omar al-Digeir, a senior opposition leader and member of the umbrella protest group the Alliance for Freedom and Change.

He told AFP the body headed by the military would also include civilian representatives and focus on “issues concerning the security aspects of the country”.

The “exact job description” of both the councils has yet to be decided, he said. “No final decision has been taken yet.”

Thousands of protesters remain camped outside the army headquarters in Khartoum, demanding the generals transfer power to a civilian administration.

The military has so far rebuffed calls to step aside and it remained unclear if both sides would agree to the new idea.

The military council’s spokesman Lieutenant General Shamseddine said it had not received any proposals from the mediators.

He said the council will respond Monday to propositions on broader future power structures put forward earlier by the protesters.

The military and protest leaders have been at odds over the composition of any joint ruling body — with each party pushing to have a majority.

Digeir said the mediators have proposed an overall package that includes not just the proposed two councils, but also how executive and legislative bodies would work in a post-Bashir era.

But within the protest camp there was opposition to the new plan if it meant the generals maintaining a major role in running the country.

“We are completely against this idea. We only want a symbolic sovereign council with military representation,” said Siddig Youssef, head of the Sudan Communist Party, part of the protest movement.

“We want a parliamentary system with the authority in the hands of parliament and the cabinet,” he told AFP.

“The military should be confined only to a body tasked with matters related to security and defence.”

Protests initially erupted in Sudan on December 19 in response to a government decision to triple the price of bread, and quickly turned against Bashir’s thirty-year rule.

Despite the toppling of the iron-fisted leader protesters have stayed put around the army headquarters in Khartoum to keep up pressure on the military.

While there are deep divisions over the way forward, the economic problems that brought people out onto the streets against Bashir remain pressing.

On the eve of the Muslim holy month of Ramadan Sunday hundreds of people formed long queues at petrol stations and bank machines in Khartoum.

“For more than a week now, there’s been no cash even in the ATMs installed in our company premises,” an employee of a leading industrial corporation in the capital told AFP.

A driver with a private tour operator said he got his car partially filled after waiting for an entire day at a Khartoum petrol station.

“People at fuel stations are really angry. They have to wait for six to seven hours in this hot sun to get fuel,” he said without giving his name.