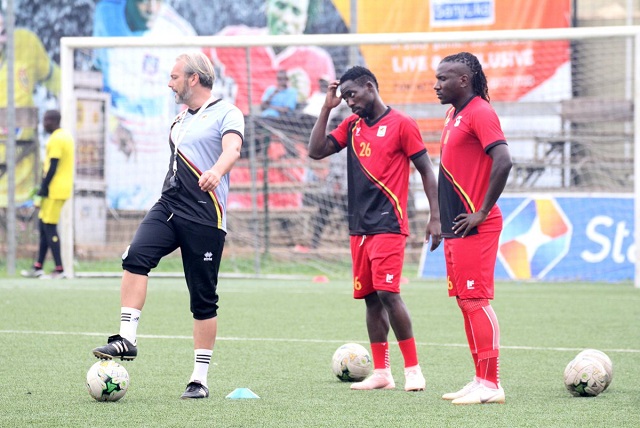 Kampala, Uganda | THE INDEPENDENT | Uganda Cranes will face Ivory Coast in an International friendly match in the United Arab Emirates on June 15th.

The two teams will use the match to prepare for the 2019 Total Africa Cup of Nations (Afcon).

Head coach Sebastien Desabre made the announcement on Monday at the Kabira Country Club in Kampala.

“We have already secured the friendly against Ivory Coast and we are now working on having another friendly match on June 9th that we shall announce later,” added the coach.

Desabre made it clear that his team will camp in the UAE for three weeks before flying to Egypt on June 17th. The coach said they need to prepare well for the Afcon because the objective is to qualify for the knock out stage.

“We shall take every game as it comes and we are already scouting around the other teams we shall face in the group like Zimbabwe, DR Congo and hosts Egypt,” he added.

The coach made it clear that although he is aware the group is tough, he knows each of the teams in the group so well. “We need to prepare well for our opening match against DR Congo because the first game means a lot,” he added.

He made it clear that with good preparations his team has the quality to beat any team. Desabre made it clear that although he had summoned Maroons FC player Brian Majwega to the squad, the Uganda FA advised him to drop the player for previous disciplinary issues.

The 2019 Afcon which will for the first time attract 24 teams will take place June 21st to July 19th. Besides Uganda, the other teams from the Council for East and Central African Football Associations (Cecafa) that will feature in the Afcon include; Kenya, Tanzania and Burundi.