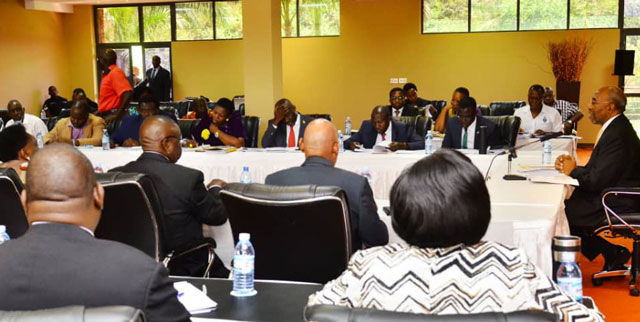 Kampala, Uganda | THE INDEPENDENT | The second Inter-Party Organisation for Dialogue (IPOD) summit has been pushed to Monday, May 20, 2019. Its venue has also changed from Lira to Protea Hotel, Entebbe.

IPOD is an umbrella of political parties with representation in parliament. These include the ruling National Resistance Movement (NRM), the Democratic Party (DP) Forum for Democratic Change (FDC), Uganda Peoples’ Congress (UPC) and Justice Forum (JEEMA).

The second summit, a meeting of leaders of the political parties was supposed to take place on Wednesday, May 15.  But according to IPOD Executive Secretary, Frank Rusa says the decision to change the date and the venue was reached by the IPOD council in a meeting held today after requests advanced by the political parties.  FDC earlier today stated that they would skip this meeting.

The council brings together Secretary Generals of political parties.   Rusa says political party leaders requested for the rescheduling of the meeting to fully get ready to attend.

“The party leaders got back to us asking for an extension so that they can attend the meeting,” he said. The request for Entebbe was specifically made by the NRM. The council debated and agreed to the changes.”

The second summit is a follow of December 2018 inaugural summit. It will receive a council report on four themes.  They are; improvement of public order management, proposals on a more inclusive electoral system and electoral reforms, the regulatory mechanism of independent political actors-Members of Parliament and reforms on current public funding for political parties.