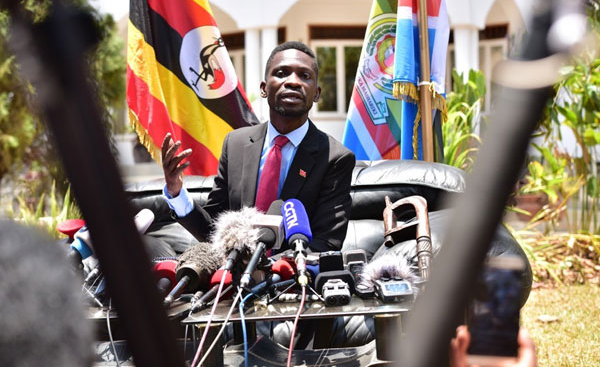 Kyadondo East Member of Parliament, Robert Kyagulanyi alias Bobi Wine on Sunday wooed youth in Ntungamo District to turn up in big numbers and register as voters if they want to change the leadership of the country in the forthcoming 2021 general elections.

Bobi Wine said this while speaking to the youth in Rubaare Town in Ntungamo District at a stopover, shortly after he attended a church service at All Saints Rubaare Church of Uganda. Bobi Wine spent the weekend in Rubaare, in which he attended an introduction (kuhingira) function for his brother-in-law in Kabale District, visited his in-laws, and attended a function at All Saints Church .

Dressed in a checked army green double breast suit, Bobi Wine accompanied by his father-in-law Dr Joseph Kagaju, his wife Babra Itungo and other family members entered the church at about 10:40am and during his brief speech, avoided speaking politics.

“I am so lucky that I am here in this church and I love you so much people of Rubaare, I won’t speak politics because I am with people who do not like politics, I will leave the rest to my wife and the people I came with. I thank you so much for being there for us,” Mr Kyagulanyi said.

Shortly after his speech, Bobi Wine left with his entourage, stopping at Caltex Petrol Station in Rubaare town. His car was soon surrounded by many youth posing for photos and trying to interest him in speaking. He avoided them for several minutes, moving from the vehicle to washrooms, to the garage and then back to his vehicle.

He, however, after being provoked to say something, emerged out of the vehicle through the open roof addressing the youth for about five minutes.

“If you want change to happen, get your national IDs, go to the registration centres, register as voters and take control of your own destiny. There is no way you would wish for a better world if you don’t participate in its making. This is our time and this is when we can change our world,” Mr Kyagulanyi said, as the youth cheered on.

He then left waving to the cheering crowd, singing Tuliyambala Engule as they drove off to Ntungamo on his way back to Kampala.