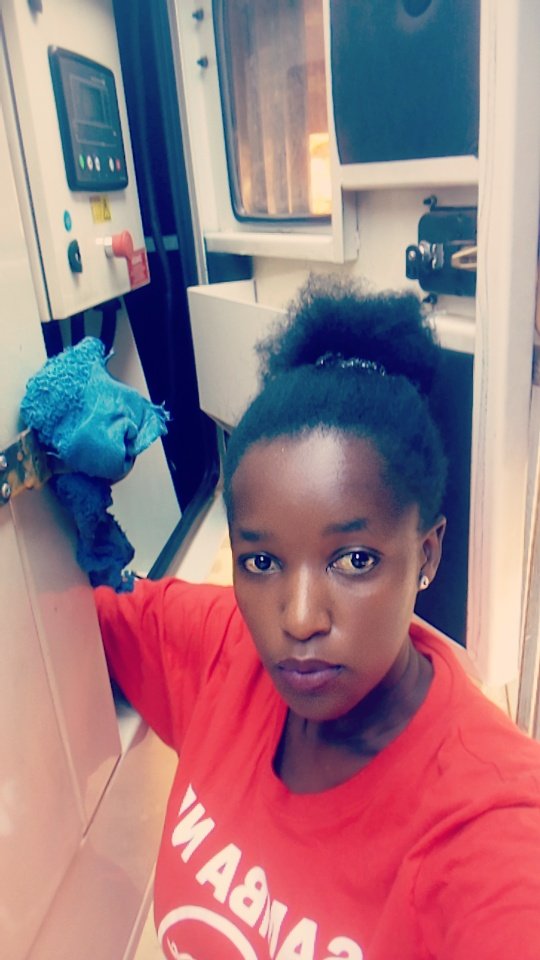 In an era of social media where a number of youth focus on appearing rich rather than actually being youth, not every millennial will be willing to get dirty or putting in the work to get money.

In Nakawa at Makerere University Business School (MUBs) is where I met with Christine Joy Turamuhawe, a year two student of International Business who cleans people’s houses for money to settle her bills and upkeep without bothering her parents.

Christine told me her motivation came from a desire to be different from some girls that sleep around for money. She cannot bring herself to do that.

“Passing girls sleep around for money, I’d really like to change that. I also wanted to help my parents out on upkeep. I also follow Moses Number 1 (SafeBoda’s Number very first Rider in Uganda) on Twitter. He is so proud of his blue collar job and made me to see boda boda riding differently. I’d also want to change people’s perception on housekeepers and cleaners,” Christine said in part is what has inspired her.

Asked on how she raised capital to start out and buy the material she uses, Christine says that she didn’t need a large amount of capital but just 2000 shillings to transport her to the very first house that she cleaned, got paid and the rest is history. She also uses social media to promote her work including her Twitter handle @ugawoman1.

She says it has been a successful venture this far with at least three clients every week and that she see’s herself opening up a registered company to work with other like minded youth who might need to work with her.

Like any other job, there are challenges she faces. She says her greatest challenge has been feeling insecure more so when she gets to work for male clients.

“I work in people’s private homes. I’m a girl and sometimes I feel insecure and but so far no one has tried to make advances on me and I thank God. But it’s a great threat.”

She adds, ”Some people also want to under pay me because they see house keeping as a low life job yet I use transport to get to their homes. Some work also requires machines which I don’t have yet.”

Asked if her parents know that their daughter is cleaning people’s houses for upkeep, she says that they’re very supportive about the idea and also vowed to help her in registering the company with the Company Registrar so that she can fully operate within the laws stipulated under the Company’s act.

“My friends have also been supportive. At first I kept it to myself thinking it will affect how they see me to be honest. But later when I gathered the courage to talk about it, I was surprised to see that most of them wanted to even join me,” Christine said in her interview with NilePost.

On whether she see’s herself doing this even after Campus, she tells me that she will keep pushing it for a while and try to recruit many Campus students as possible.

“After campus, I will push it on for a while. I plan on taking up Campus students for a long time. I did it for them.”

She advises youth to stop minimising jobs and notes that what they refer to as blue collar jobs can even pay more money than the office jobs they yearn for.

She has since widened up her service line to more than cleaning houses. She now offers regular weekly cleaning, offers baby sitting services, catering, washing utensils, laundry among others.