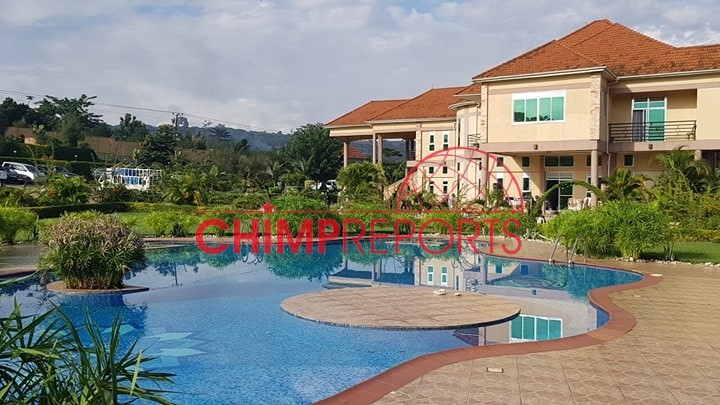 The first pictures of the swimming pool which took the lives of State Minister for water Resources, Ronald Kibuule’s twins have emerged.

The 2-year-old boys, Raymon Kato and Rayden Wasswa were playing around the swimming pool when they drowned on Monday evening.

Police is currently taking statements from workers at the house who were present when the shocking incident occurred.

The expansive but unprotected swimming pool is located a few metres away from the gigantic residential house.

The storied structure sits on about five acres of land in Mbalala, Mukono District.

Experts say parents must at all times provide pool fences and child proof locking system to protect kids from drowning in the private swimming pools.

Back gates and fence doors should be secured and there shouldn’t be any unnecessary running near the pool. Some families invest in pool alarms as a security device.

The deceased with their mother Fortunate Kibuule

Kibuule was visibly inconsolable. “I don’t know where to start from,” he told mourners who flocked the home after receiving the sad news.

Mayinja Walugembe, the chairman of the funeral preparations told ChimpReports on Tuesday morning that the burial ceremony for the deceased will be held tomorrow Wednesday in Kapeke village, Mukono – just a few miles away from the minister’s residence.

A prayer service will be held later today after the bodies have been brought from the mortuary at Mulago Referral Hospital.

Ugandans took to social media to send their condolences after ChimpReports broke the news on Monday evening.

“It is with great sadness that I learnt about the tragic passing of Honourable Kibuule’s children,” said Lt Gen Muhoozi Kainerugaba.

“May God comfort your family in this difficult time my brother.”