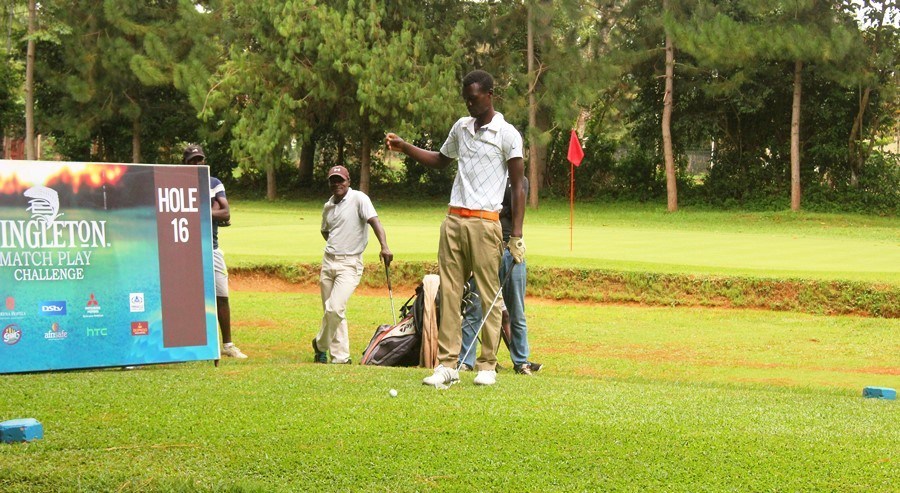 Rains and golf do not mix particularly
so when it is very heavy.

There was anxiety prior to the
official tee for the fourth round of the 2019 Singleton Golf Challenge
championship in Entebbe at the par 71 lake side golfing facility.

Sadly, the main match play
championship as well many in the subsidiary section were affected for this
particular round by the persistent rain.

The round was marred by heavy rains
from as early as 7:30 AM till mid-day.

The professionals who had an early 7
AM tee-off had to abandon their game by the fourth hole until they left the
course to seek refuge at the club house.

Later after the rains had reduced,
they embarked on their game from the 5th hole.

Consequently, two matches of the main
event in the amateur’s categories were not completed because of limited time.

The pairing of Samuel Kato and Collins
Odere against Martha Babirye with Maureen Okura did not play.

Also affected was the duo of Silver
Rugambwa and Abbey Bagalana against Busingye with Lutwama.

The organizers have since confirmed the unfinished matches to be played this Wednesday, 15th May 2019 at Entebbe Golf Club at noon starting on hold 17.

In the paid ranks catergory, the
quarter finals were completed with a success.

Abraham Ainamani triumphed over David
Kamulindwa Amooti by 1 up and

The rains disorganized me at the start. We halted the game when it was so heavy at hole number four but continued and finished well. In all weather, professionals move on. I am happy to have won my game. I am now looking set for the semi-finals and the finals.

Next month during the semi-finals,
Mutawe will battle Rugumayo as Mutebi squares off with Abraham Ainamani.

As usual, the round of golf was summarized
by merry making at the famous 19th hole.

Clad in the Cowboy to suit the theme
night, the golfers were dressed like Texans with matching hats, shoes and
medallion belts.

Many had that pistol strapped around
the waist under the arm.

Round five in June will involve the semi-finals for the main championship whose winner will make the grade for the Dubai Desert Classic tournament.

The professionals are playing for Shs 50M.