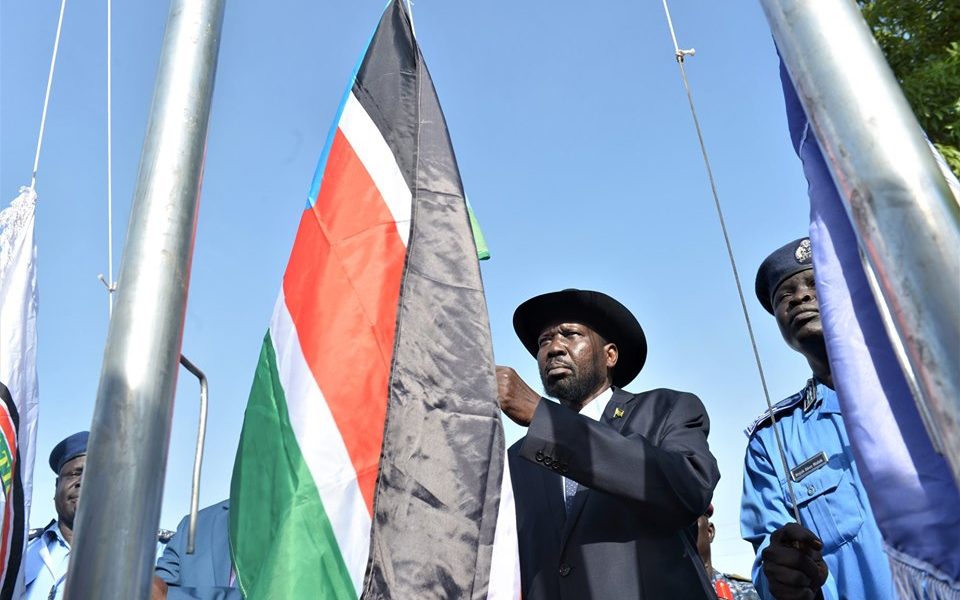 This is ChimpReports’ Morning Intelligence Briefing.

Kiir meeting with Rebecca Garang in Juba on Monday

He has since asked for an extension of six months before the formation of the government of national unity.

Addressing Parliament on Tuesday, Kiir observed: “In the spirit of the agreement and our experience in Rome, I once more extend my invitation to Dr Riek Machar to return home. I have completely forgiven him and all I ask from him is to become a peace partner, for he is no longer my opponent.”

Kiir fired Machar as Vice President in 2013, sparking an armed conflict that left thousands of people dead and millions displaced.

Pope Francis recently invited Machar, Kiir and Rebecca Garang to the Vatican in Rome where he kissed their feet and urged them to reconcile, prioritize peace and rebuild the war-torn country.

Kiir yesterday told lawmakers in Juba that the “weight of responsibility on our shoulders is quite heavy in light of what the religious leaders and our own people expect of us. The world religious leaders expect us to bring peace to our people who so desperately need it and in doing so we also lift the burden off ourselves.”

The new government and legislature were to be inaugurated on May 12, 2019.

“This is now delayed for six months at the request of SPLM-IO. I was seriously opposed to the delay in the formation of government because it sends a wrong message to our people that we are not serious and that we are not ready for peace,” said Kiir.

“However, in the spirit of the agreement we had to listen to our partners’ concerns and so we accepted the extension.”

Kampala: The Attorney General, Hon. William Byaruhanga has said that government will present the bills on electoral reforms before Parliament in two weeks’ time.

Byaruhanga who made a statement to the House on Tuesday, 14 May 2019 said that, ‘the draft bills have been prepared for submission to Cabinet for approval before introduced in Parliament by the end of May 2019 for debate and enactment’.

The draft Bills constitute amendments arising out of the Supreme Court recommendations in Constitutional Petition No.1 of 2016, the European Union Election Observation Mission Report of the Uganda Presidential, Parliamentary and Local Council Elections 18th February 2016, consequential amendments from the Constitution (Amendment) Act, 2018, and proposed amendments submitted to the Ministry of Justice and Constitutional Affairs by the Electoral Commission.

Byaruhanga said that the appeals by Male Mabirizi challenging the constitutionality of the constitution (amendment) act informed the content of the electoral reform bills.

“Following the Supreme Court ruling on 18th April, 2019 in the above appeal upholding the Constitution (Amendment) Act, 2018, the Bills on electoral law reforms can now proceed without further delay, ” he added.

Hon. Wilfred Nuwagaba (Indep. Ndorwa East) sought leave of the House to present a motion on constitutional amendments which he said may not be covered by the government in the bills.

“Since 2015 we have talked about the constitution reforms that touch the entire electoral process. We propose that we have a more comprehensive amendment that goes beyond the laws alone,” Niwagaba said.

Niwagaba among others calls for the proper and independent composition of the Electoral Commission, removal of the army from Parliament and the creation of a position of Deputy President and his election.

Nairobi: President Uhuru Kenyatta has praised departed Head of Public Service and Secretary to the Cabinet Jeremiah Gitau Kiereini as a towering reform minded public servant and patriotic Kenyan who served his country with distinction.

Kenyatta said Kiereini remains an important part of Kenya’s public service history because of his many achievements key among them being the role he played in the modernization of the Kenyan military when he served as Permanent Secretary in the Ministry of Defence.

“Mr. Kiereini was a polished patriot and loyal Kenyan who served this country with dedication as a public servant for over 30 years, rising through the ranks to the position of Head of Public Service and Secretary to the Cabinet,” said the President.

The President pointed out that the many reforms the late Kiereini initiated while at the helm of the civil service as the Head of the Public Service and Secretary to the Cabinet forms the foundation upon which current successes in the sector are being realised.

After retirement from the public service, Mr Kiereini transitioned into the private sector by being appointed Chairman of the Kenya Breweries Board (KBL) in 1988, a company he later transformed into the East African Breweries Limited.

The late Kiereini served on the boards of several companies including Unga Group Limited, CMC Holdings, CFC Stanbic, Heritage Insurance and CFC Life among others.

The President prayed to God to give the family the comfort and fortitude at this difficult period of mourning.

Museveni being welcomed in Hoima on Tuesday (Photo: PPU)

The ruling party’s Central Executive Committee (CEC) earlier this year decided that President Museveni contests again in the next polls and beyond, a move that was heavily criticized by the opposition.

Museveni has ruled Uganda since 1986.

Critics say Museveni should step aside for new leadership to take on the mantle of transforming the country.

They also argue that Museveni’s failure to leave continues to perpetuate political uncertainty in the country which undermines efforts to attract heavy foreign direct investment.

But Museveni’s supporters say he remains relevant especially in consolidating peace amid heightened security tensions in the region.

The Hoima resolution was read by the LCV Chairperson for Kiryandongo district Charles Ntaroki at a leaders’ zonal meeting held at Kontiki Hotel in Hoima Municipality, Hoima District.

Over 1,500 leaders gathered at the Hotel to receive President Museveni who was in the district to rally local leaders to champion the struggle for wealth creation and fight land fragmentation

The leaders resolved to fully support the resolutions of the retreat of the Central Executive committee held at Chobe Safari Lodge in February.

They also welcomed the resolutions of the retreat of the NRM Parliamentary caucus in Ngoma in March.

“We particularly and without hesitation, endorse His Excellency Yoweri K. Museveni as our sole candidate for election as the NRM National Chairman and NRM Presidential candidate in 2020/2021,” said Ntaroki amidst cheers from the local leaders.

Bunyoro sub-region voted overwhelmingly with over 70 percent for President Museveni in 2016.

The President will today Wednesday address a zonal rally on wealth and job creation in Masindi and thereafter address the nation at a press conference at the State Lodge in Masindi.