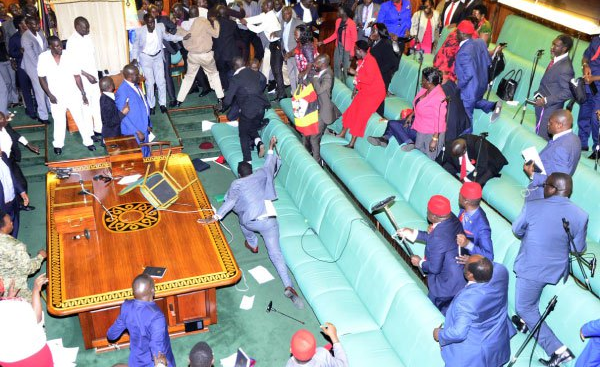 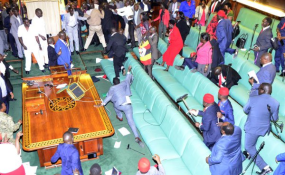 Members of Parliament fight in the Parliament chambers during the last constitutional amendment that sought to remove the presidential age limit in 2017.

Parliament — The government will table a new Bill in Parliament before the end of this month to introduce a raft of proposed Constitution amendments, the Attorney General (AG), Mr William Byaruhanga, said yesterday.

“The Bills have been prepared for submission to Cabinet for approval prior to being introduced in Parliament by end of May for debate and enactment,” he said in response to accusations that the government was dragging its feet on the matter.

Members of Parliament, particularly those in the Opposition, had raised concern that government’s inordinate delay to present constitutional reforms as ordered by the Supreme Court, was calculated to circumvent the Electoral Commission’s (EC) plan to run a clean vote.

Releasing the 2020/21 strategic plan and election roadmap in Kampala last December, EC chairman Simon Byabakama said they were willing to deliver a “fair and transparent” ballot as long as other stakeholders meet their part of the bargain.

“To achieve the above, the commission appeals to the government, particularly Cabinet and the Legislature, to ensure timely amendment and or enactment of the relevant electoral laws, including considerations of recommendations [by] the Supreme Court,” he noted.

Supreme Court judges, in their verdict on the Amama Mbabazi petition challenging President Museveni’s re-election in 2016, raised 10 issues for the Executive and Parliament to fix through legislation.

The Supreme Court ordered the AG, as the government’s chief legal adviser, to follow up on the implementation of the recommendations but he is yet to report back to court, even after the two-year threshold period the court gave him to update it, lapsed.

Mr Byaruhanga yesterday told MPs that they had delayed to table the Bills due to the protracted legal battle, both at the Constitutional Court and Supreme Court, over Parliament’s amendments to the Constitution to, among other things, scrap the presidential age limit. He did not divulge details of the proposed constitutional changes.

The shadow Attorney General, Mr Wilfred Niwagaba, said the government was running Parliament in circles, and there was no sign that they are ready. He said the new constitution al amendments must be broader than those ordered by the Supreme Court to include proposals by the Opposition.

Mr Niwagaba has already presented to Parliament, a draft motion, seeking leave of the House to table what he calls comprehensive reforms.

The Deputy Speaker, Mr Jacob Oulanyah, who presided over the House proceedings, advised him to delay tabling of the Private Member’s Bill to the government’s self-set deadline at the end of this month.

These included revising the timeframe for filing and determining a presidential election petition, associated nature of evidence to be adduced, the duration within which to hold election in the event of an annulment and regulation on technology use in voting.

Other matters the justices asked the two arms of government to prescribe in law included access and use of the public broadcaster (Uganda Broadcasting Corporation), right timing for enacting required legislation, donations during campaigns, role of public officers in vote canvassing and that of the Attorney General in election petitions.