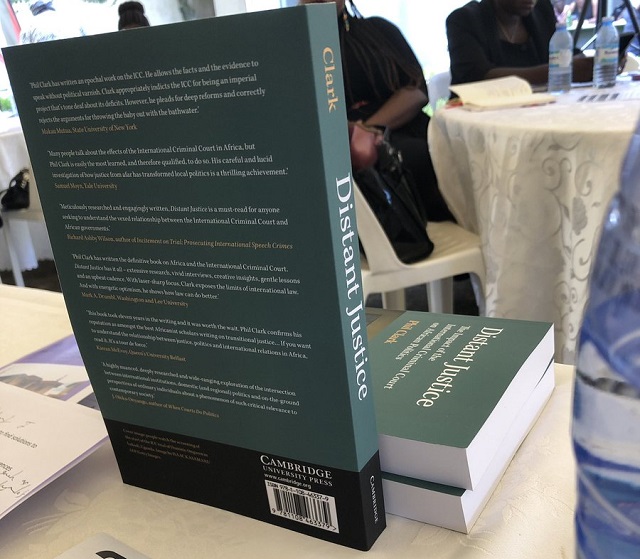 Kampala, Uganda | THE INDEPENDENT | The International Criminal Court-ICC has come under fresh criticism for suffocating justice mechanisms and politics in Africa.

This time, The Hague based court is being criticized by an Australian Scholar and Lecturer at the SOAS, University of London Phil Clark, in a new book titled; Distant Justice: The Impact of the International Criminal Court on African Politics.

Phil Clark wrote the book featuring interviews with 650 people after 11 years of field works in areas hosting activities of the International Criminal Court – ICC in Northern Uganda and the Democratic Republic of Congo.

On the case of Dominic Ongwen prosecution in The Hague, the author of the book says while there are fundamental problems with the domestic judicial system, there is very little to gain by prosecuting Ongwen in The Hague, as Clark explains.

Launching the book in Kampala, Phil Clark said a strong notion of distance justice is not only reflected in the geographical location of the court but also in the various ways it operates. He says the Work of the International Criminal Court is also crippling African creativity for dealing with African problems such as conflicts. He cites the failure of the Juba Peace process between the Lords’s Resistance Army and the government of Uganda as one case which could have ended the conflict peacefully.

Clark says his findings indicate that the International criminal court (ICC) has failed to appreciate critical political, cultural and economic context under which international crimes are committed in Africa by failing to involve African legal technical experts familiar with the cultural context of African societies.

Clark says until about six months ago, the Office of the Prosecutor (OTP) had a protocol limiting its investigators to ten days at a time in the field for security purposes, something which compromised the quality of their investigations, evidence collection from the fields and contradicts the notion of complementarity to domestic judicial institutions.

Clark argues in the book that complementarity necessitate partnership with domestic institutions instead of projecting itself as impartial and superior criminal justice institution detached from politically polluted environment.

The book mentions other grey areas in the works of the International Criminal Court including inert failure to cultivate mechanisms for navigating difficult political atmosphere of the absence of state cooperation.

The others are undermining domestic judiciaries across Africa as it did in Ituri region in the North Eastern Democratic Republic of Congo in the case of Thomas Lubanga, Mathieu Gudilo and Germa in Katanga which the International Criminal Court stole from under the noses of the Military Court system in Bunia which was already investigating those cases with massive transformations.

It says the court is even failing to gather strong evidence in situations of absolute state cooperation as it was in the acquittal of former President of Ivory Coast Laurent Gbagbo and Jean Pierre Bemba in the Democratic Republic of Congo and the Central African Republic, as Phil explains.

She says while the book should help the court to restructure the way it functions in order to achieve its desired objective of ending impunity around the World, domestic African government must put in place resources for dealing with mass crimes under the jurisdiction of the International Criminal Court (ICC).