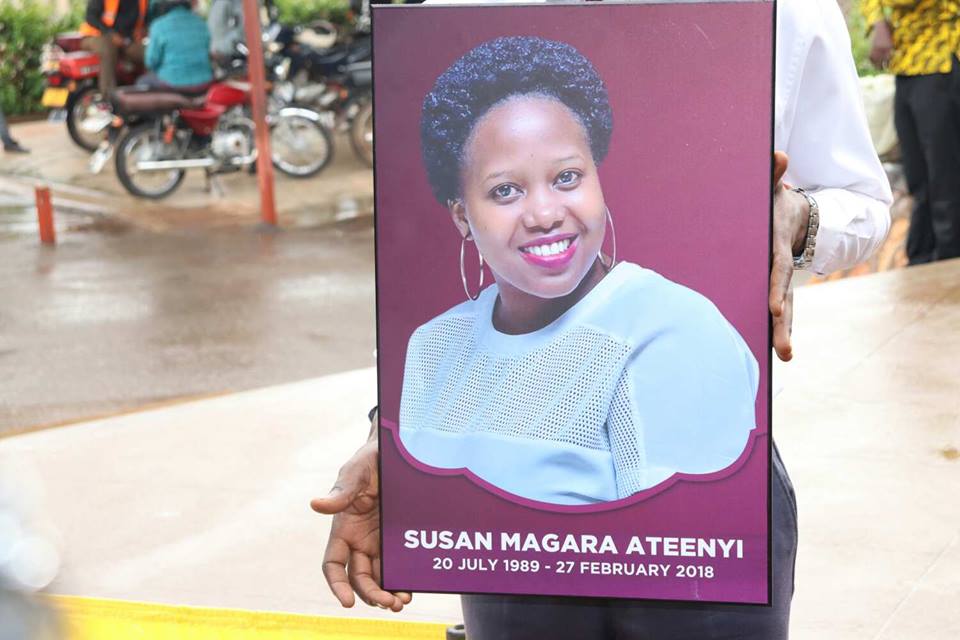 The prime suspect in the gruesome murder of Susan Magara in February 2018 has finally been extradited from South Africa to Uganda, Police has said.

Government has for several months been attempting to have the key suspect identified as Patrick Kashaija alias Patrick Agaba alias Pato extradited to Uganda to face charges of kidnap and murder.

Now, Police has Thursday issued a statement revealing that Pato was brought to Uganda on March 15 following successful efforts coordinated by Interpol.

He is a wanted fugitive in connection to the killing of 28-year-old Magara whose kidnap and subsequent murder gripped the country in shock.

Authorities in Uganda suspect that he is the voice behind the audio recording that was extracted from a telephone conversation between one of the captors of Susan Magara and her family. In the conversation, the man who was speaking Runyoro was giving directions to the family of the deceased.

Police made the audio recording public and announced a Shs 100m reward to anyone who would help in positively identifying the voice.

Later, it emerged that when the family went to the said spot, they found a polythene bag containing a memory stick and two fingers belonging to Susan.

In other audio recordings that circulated on social media around the same period, a man with a similar voice would be heard talking to one of Susan’s relatives, demanding ransom payment in exchange for Susan’s release.

He repeatedly made threats if the family dared to involve the Police. He further said he knew the family very well and that he was sure they would afford the hefty sum (USD 200,000) that he was demanding.

Pato was arrested on March 7 last year by members of Interpol South Africa Crime Intelligence and the National Investigation Unit at his residential address in Midrand, according to the statement by Uganda’s Police spokesperson, CP Fred Enanga.

The suspect was recently handed over to a special team of detectives from Uganda who transported him to Uganda on May 15 and took him into Police custody for further interrogation.

It follows the signing on March 25 of an extradition order by South Africa’s Minister of Justice and Correctional Services, for the return of the suspect to Uganda.

How he left Uganda

Police say his arrest was informed by his “suspicious conduct” in the days that followed the abduction of Susan Magara.

According to Police, Pato applied for a Visa to South Africa with a flight plan for February 16. Instead, he left Entebbe International Airport on February 17 for Harare through Nairobi. However, he stopped and falsely declared to the immigration authorities that he was returning to Uganda from Accra, Ghana.

“He returned on the same day and thereafter traveled by road through Botswana to South Africa on February 24, coincidentally the same day the advance ransom payment was delivered to the perpetrators,” the statement by Police states.

Enanga says the suspect is still presumed innocent until proven beyond reasonable doubt before the courts of law.

“His case file is being processed for attention of the Director of Public Prosecution (DPP) who upon perusal will determine whether to jointly charge him with the eight other acccused persons already committed to the High Court,” Enanga said.

Susan Magara, who was a cashier with Bwendero Dairy Farm (BDF) along Kabaka Njagala road in Lubaga was kidnapped on February 7, 2018 at around 9pm in the night

She is said to have been driving to her home in Lungujja, Lubaga Division when her abducters attacked her.

Her motor vehicle was later found abandoned on the roadside with no sign of her. The body of Magara was recovered on February 27 after it was dumped in Kitiko in Kigo, off Entebbe Road.

In May 2018, nine people including traders, boda boda cyclists and an Imam of Usafi mosque were charged in court and remanded to Luzira prison for their alleged involvement in the death of Susan Magara.

The nine were charged with two counts; kidnap with intent to procure a ransom, and murder.

The State accuses the nine suspects, including others who are still at large of kidnapping Susan Magara on February 7 this year with intent to procure a ransom and later killing her on February 27.