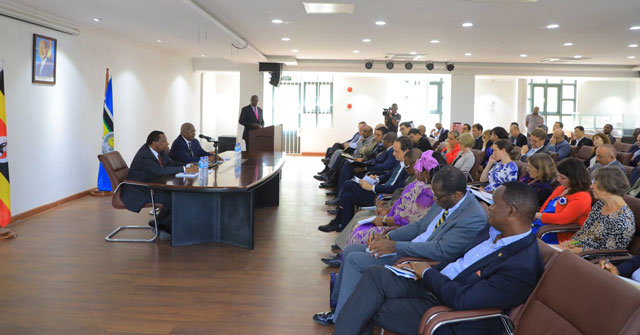 Kampala, Uganda | THE INDEPENDENT | Uganda Foreign Affairs Minister Sam Kutesa has today told heads of missions accredited to Uganda that Rwandan security operatives have been entering the country without permission, a move that could have put the security of citizens at risk. He was briefing the ambassadors on the on the current poor state of Uganda-Rwanda relations.

“A number of Rwandan security operatives have been entering Uganda without following laid down procedures governing the entry of security personnel into the country,” Kutesa told diplomatic corps in a meeting held today. He, however, added that a number of them were apprehended and deported.

Kuteesa explained that Uganda has been a target and victim of terrorist attacks; including assassinations of Moslem Sheiks and senior government officials and that the government of Uganda takes seriously its duty and obligation to protect the security of its citizens and its borders.

He warned that “any local or foreign threats will continue to be dealt with decisively whenever and wherever they occur”.

Kutesa however assured diplomats that the Ugandan government is convinced that the current hitch in the state bilateral relations between the two neighbor’s will be resolved.

The address comes after the Rwandan Foreign Affairs Minister Dr Richard Sezibera addressed diplomatic corps accredited to Kigali on April 30, 2019, where he accused Uganda of harassing its citizens and hosting elements hostile to the Rwanda administration.

Rwanda closed its Katuna border in February 2019 and issued a travel advisory to its citizens not to enter Uganda, a move Kutesa said took Kampala by surprise.

On the accusation that Uganda hosts those seeking to overthrow the Kigali administration; Kutesa said: “Uganda cannot allow its territory to be used to threaten the security of a neighbouring country.”

This has been the same position for the Uganda government since February when Rwanda closed the Katuna border.

This week President Museveni told a gathering in Masindi that even Rwanda continues to close its border, the trade will still go on, although this via smuggling.     The addresses of the Foreign Affairs ministers of both countries to diplomats indicate that there has been hardly any progress in resolving the impasse between the two countries.