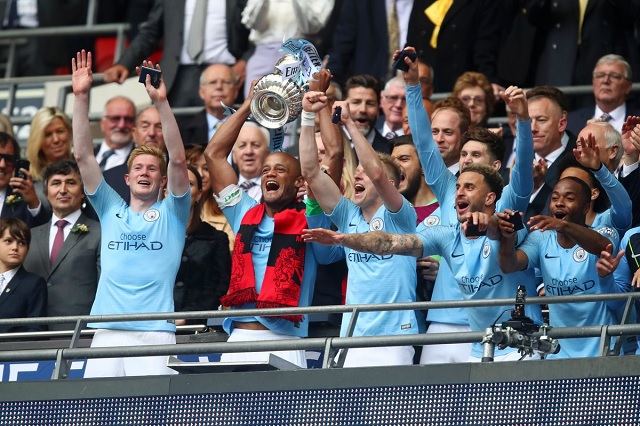 London, United Kingdom | AFP | Pep Guardiola saluted Manchester City’s history makers after they clinched the domestic treble with a swaggering 6-0 rout of Watford in the FA Cup final on Saturday.

Guardiola’s side capped an incredible campaign in fittingly dynamic fashion as Watford were put to the sword by Raheem Sterling’s hat-trick and goals from David Silva, Kevin De Bruyne and Gabriel Jesus.

They are the first English top-flight side to register 50 wins in all competitions in a single season.

Guardiola’s men also scored a record 169 goals in 61 games this season, beating their own previous best of 156.

City now rank high on the list of the greatest English teams of all-time and Guardiola admitted it was remarkable to watch his side scale such heights.

“It was an incredible final for us and we have finished an incredible year. To all the people at the club a big congratulations, especially the players because they are the reason why we have won these titles,” he told the BBC.

Although City finished as emphatic winners, the final could have been different if Watford had capitalised on a lively opening at Wembley.

Crucially, the Hornets wasted a golden chance in the 11th minute when Roberto Pereyra ran clear, only to see his shot saved by Ederson.

Guardiola agreed that Ederson’s save was a turning point.

“In the final these kind of things make the difference. Ederson saved us at a key point at the beginning of the game, because 1-0 would have been really difficult for us,” he said.

City have now lifted five of the past major six domestic trophies available.

As Guardiola watched his player cavort joyously around the pitch after the final whistle, the Spaniard was asked if City could top their astonishing run over the last two years.

Guardiola admitted last week that he is addicted to winning and, ominously for City’s rivals, he made it clear he expects his stars to be even better next term.

“We have to, always you can improve. There is no sense to stay still,” he said.

City captain Vincent Kompany was quick to pay tribute to Guardiola for his ability to hold his squad to a high standard.

“It starts with the manager, who set the standard at the start of the season and said we had to go back-to-back (as title winners), and then it’s the group,” Kompany said

“It’s the best team in the world. To set such a high standard for such a long period, for two years running. What a team, what a privilege!”