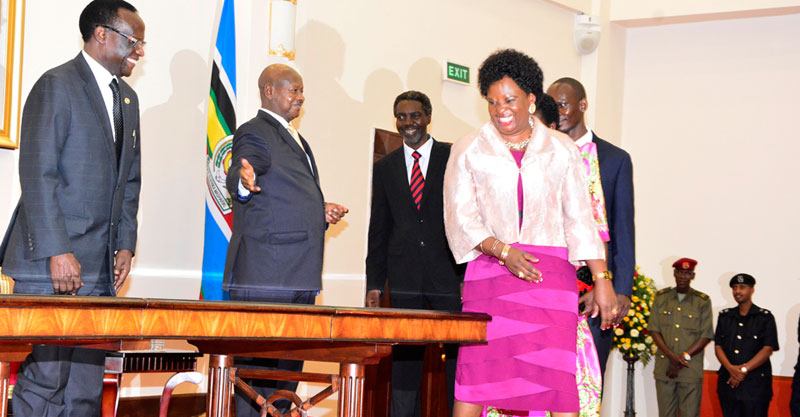 A concerned member of the Uganda Peoples Congress (UPC) has petitioned the party Disciplinary Committee Chairman, Sospater Akwenyu calling him to act against some errant party leaders including the party President, Jimmy Akena and his wife, Betty Amongi.

Softpower News has obtained a copy of the petitioned as signed in which a one Kokas Okello raises several allegations against party principals.

“I humbly write complaining about the unbecoming conduct of some members of the party including; Betty Amongi, Jimmy Akena, Onac Okello and Celestine Ouma,” the petitioner noted.

Okello accuses Betty Amongi for among others accepting to work for the ruling NRM party as minister of lands without approval of the party’s National Council or Delegates Conference.

He accuses the party president of hoodwinking the UPC cabinet when he promised to convene the National Council to discuss the approval of the appointment of Betty Amongi as a minister in the NRM government but hasn’t convened any up to date.

“Akena has also received billions of money from President Museveni in the name of the UPC and for the UPC though he has gone ahead to personalise the fund without declaring it to the party members,” Okello claims.

The petitioner has also accused the party president of abusing the party constitution by not calling any organs of the party it is compulsory for him to call for the meetings at least once in a year.

He also called on the Disciplinary committee chairman to take action against a one Onac Okello alleging that he moved a resolution to endorse President Museveni’s 2021 candidature in the name of UPC and on behalf of the UPC party without authorization by UPC.

“Mr. Onac Okello should also be investigated for mobilizing UPC structures in Kole district to support Museveni without authorising by the UPC,” Okello noted in his petition.

Celistine Ouma has also been accused on similar grounds that he mobilized party structures and moved a resolution to support President Museveni’s candidature for 2021 without authorisation by party members.

“I request that a disciplinary committee hearing should be called so that I can give evidence to support my complaint against each of the above and I am looking forward to hear from you within one week from the date of this complaint,” Okello requested.

However, the party National Chairman, Lawrence Okae told our reporter that the petitioner is among a group of idlers who don’t know that the party works through organs to make any endorsement.

Lango Opposition leaders last week allegedly endorse Museveni for 2021 when they gave him a spear, shield and a stool to symbolise power.