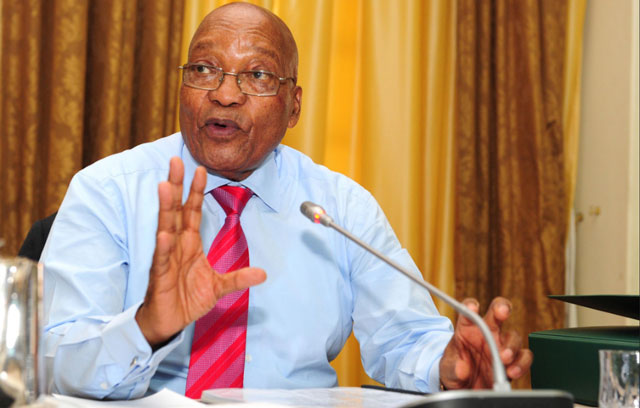 Pietermaritzburg, South Africa | AFP | Former South African president Jacob Zuma said Monday that he was victim of a “witch hunt” over corruption charges as lawyers argued in court that he could not expect a fair trial.

Zuma, who was forced to resign by the ruling ANC party last year, has been charged with 16 counts of fraud, racketeering and money laundering relating to a multi-million-dollar arms deal dating back to before he took office in 2009.

Zuma, 77, is accused of taking bribes from French defence company Thales during his time as a provincial economy minister and later as deputy president of the African National Congress (ANC) in the 1990s.

He allegedly pocketed around four million rand ($280,000, 250,000 euros) from 783 payments handled by Schabir Shaik, a businessman who acted as his financial adviser.

The charges were first brought against Zuma in 2005. They were dropped by prosecutors in 2009, shortly before he became president, and reinstated in 2016.

“My rights have been flagrantly violated,” Zuma told supporters gathered outside the court in Pietermaritzburg. “If this trial continues, it will be nothing more than a witch hunt.”

Zuma’s legal counsel Muzi Sikhakhane told the court that the case was at the “intersection of law and politics” and that Zuma faced “mob justice” due to prejudice against him.

Sikhakhane argued that Zuma’s constitutional right to a prompt trial had been “violated to the point where we could say ‘a fair trial can never happen’.”

He accused prosecutors of being “over-zealous” and asked: “Does he get stripped of human dignity because he is Mr Zuma?”

Both Zuma and Thales deny any wrongdoing and have applied to the court for a permanent stay of prosecution.

“Bearing in mind the very long delay of this procedure — through no fault of Thales at all — together with a range of factors beyond its control, Thales believes it cannot obtain a fair trial,” the company said in a press statement.

“Thales reiterates that it has no knowledge of any transgressions having been committed by any of its employees.”

Outside the Pietermartizburg high court, Zuma’s supporters held a rally for the former president.

“Politics is not good. Some people, they don’t like Zuma — that’s why they took him to court,” Vukhani Khumalo told AFP, saying court proceedings against him should be scrapped.

Zuma sat in court wearing a suit and red tie and looking occasionally at papers in front of him.

A separate judicial enquiry into alleged state corruption during Zuma’s time as president is under way in Johannesburg.

His successor, President Cyril Ramaphosa, who held on to power when the ANC won national elections with a reduced majority earlier this month, has vowed to root out corruption in the government and the party as he tries to attract investment and revive the economy.

The ANC’s reputation suffered under Zuma’s leadership, and Ramaphosa still faces resistance to his reform agenda, especially from Zuma allies still holding senior positions in the party and government.

The main opposition Democratic Alliance party fought a long battle to have the corruption charged reinstated, with Zuma’s lawyers fighting to prevent him going on trial.

Zuma, who is thought to have little personal wealth, was ordered by a court last year to pay back state funds and cover his own costs in the case, leaving him with large legal bills.