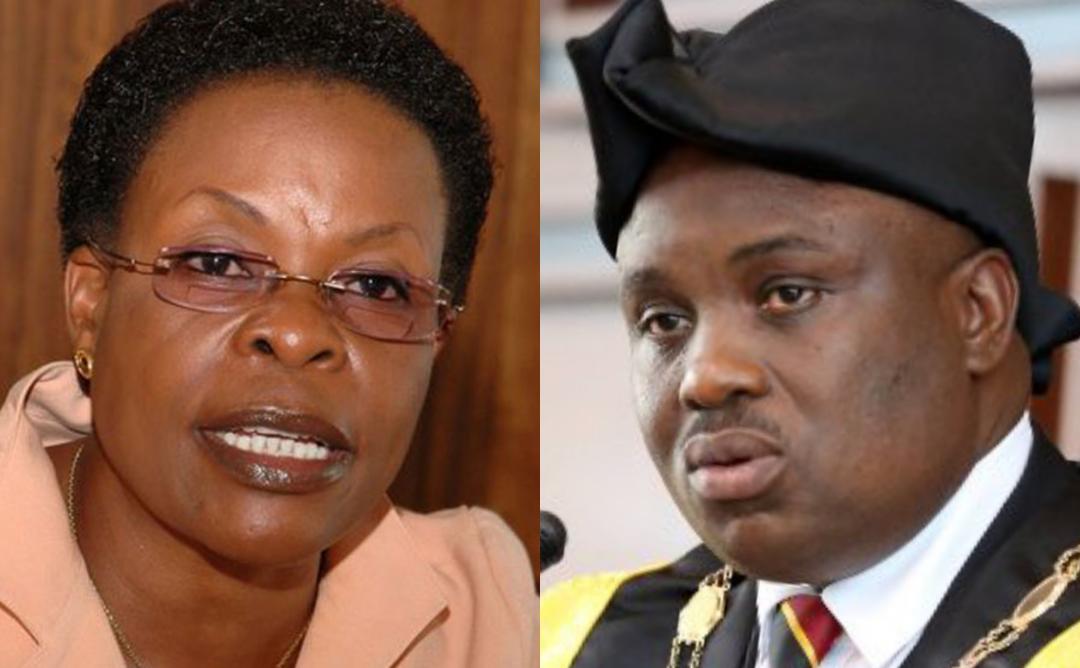 Minister of Kampala, Betty Kamya has criticized the Mayor of Kampala, Erias Lukwago for misusing public resources including the official car, security and time to conduct private duties which are outside his Mayoral mandate and against government.

The Minister made the comment on Tuesday as she presented the progress made in the Kampala metropolis, in line with the 2016 – 2021 manifesto pledges by the ruling government.

Kamya was responding to a query raised by Richard Muhinda, the Senior Presidential Advisor on Public Service Affairs. Muhinda sought to know whether the role of the Mayor of Kampala city is a full time job.

“Is Mayor of Kampala a full time job? This is the question I ask myself each time I see the Mayor in court defending people as a lawyer,” Muhinda asked Minister Kamya.

He wondered when Lukwago ever gets time to execute his mandate of Mayor for which he was elected and is paid.

Erias Lukwago, a practicing lawyer has defended several opposition politicians including four-time Presidential candidate, Dr Kizza Besigye, in court whenever they have run-ins with the government apparatus. Some of these court proceedings are conducted in the countryside such as Kabale and Mbarara, and to travel there, Lukwago always uses the official car (with government paid fuel) assigned to him as Mayor.

While responding to Muhinda, Minister Kamya said although she has been patient with the Mayor on the issue, his conduct is a waste of public resources.

“The policy of the President (Museveni) for the time I have worked with him, he is an extremely patient and tolerant person, that he will go all the way to bend over backwards so as not to cause commotion,” Kamya said.

“So, taking a cue from the President, I have also not really put a lot of pressure on the Lord Mayor. But I think that his conscience should speak to him since he is a man who brags of rule of law,” she added.

“I don’t think that rule of law allows him to use public resources like vehicles, security and time, to do private work especially anti-government private work,” she said.

She asked Muhinda to use his role as Advisor to the President to raise the issue.

“Since you are the Presidential Advisor on Public Service Affairs, I kindly request you to advise His Excellency the President. It is squarely in your docket sir,” the Minister told Muhinda.

Lukwago and Betty Kamya who is the political head of Kampala have had an acrimonious relationship with each accusing the other of frustrating the smooth running of the city.

Last year in September, Lukwago proposed reforms that seek to introduce a more leaner representation of the central government in Kampala.

He said that the Ministry of Kampala is redundant and needs to be scrapped since it lacks a clear mandate.

“The central government is over represented in Kampala. Kampala should now be under the Ministry of Local Government or any other Ministry because we have many of them. The Ministry for Kampala lacks a clear mandate, it was created to eclipse the office of the Mayor,” he said.

According to Lukwago, the mandate of the Ministry clashes with that of Kampala Capital City Authority (KCCA).

Lukwago said that some of these duplications, particularly the Minister for Kampala were deliberately made in order to get rid of the political position he occupies.