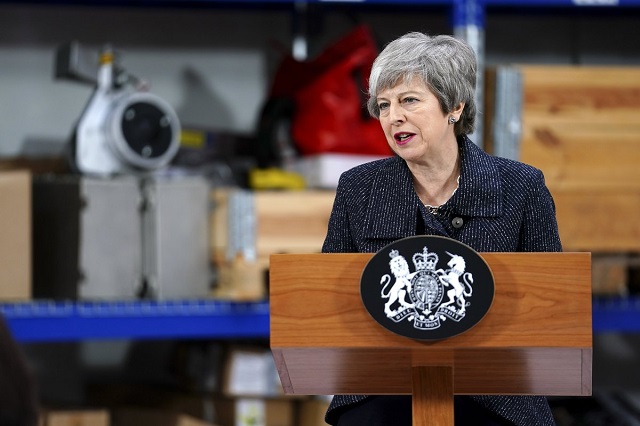 London, United Kingdom | AFP | British Prime Minister Theresa May vowed Tuesday to give lawmakers a vote on holding a second Brexit referendum as part of her final effort to salvage her hated EU divorce deal.

The embattled British leader dangled a package of sweeteners that she hopes can resolve the Brexit crisis three years after the country first voted to end four decades of membership in the European project.

Success on the fourth attempt in parliament would help May reclaim her legacy as the leader who kept her promise to safely steer a bitterly divided nation through its most profound geopolitical shift in generations.

May has already said she will leave office shortly after the measures she outlined Tuesday are put up for a vote early next month — no matter the outcome.

The most eye-catching measure is a promise to give lawmakers a chance to set a confirmatory referendum on whatever version of Brexit they end up approving in the weeks or months to come.

“I recognise the genuine and sincere strength of feeling across the house on this important issue,” May said in a nationally televised address delivered from the offices of a major accounting firm in London.

“The government will therefore include in the Withdrawal Agreement Bill at introduction a requirement to vote on whether to hold a second referendum,” she said.

“This must take place before the Withdrawal Agreement can be ratified.”

The measure is a key demand of the main opposition Labour Party.

But it is also bitterly opposed by Brexit-supporting Conservatives whose votes May also needs if she is to get her deal passed.

The British pound rose sharply in response to May’s announcement. Many businesses oppose Brexit and hope that the two sides can preserve much closer ties.

May said her proposals were this parliament’s “last chance” to end a political deadlock that has already delayed Brexit past its original March deadline and caused huge public anger.

She called them “a new Brexit deal” that Britain must now rally behind.

The government is aiming for the law to be approved by the time that parliament’s summer recess begins on July 20, which would allow Britain to leave the EU at the end of that month as long as MPs reject a second referendum.

Otherwise the process could be delayed until October 31 — the deadline set by the EU — or even further if EU leaders grant Britain another postponement.

“The majority of MPs say they want to deliver the result of the referendum. So I think we need to help them find a way. And I believe there is now one last chance to do that,” May said.

May set out 10 incentives in all that will be included in a new Brexit bill that is expected to come up for a vote in the week starting June 3.

The measures would give parliament a chance to approve a temporary customs union with the other 27 nations.

They also commit the government to preserve the rights of European workers and maintain EU environmental standards.

These are all major Labour demands.

But they threaten to only reinforce the resistance within Brexit-backing ranks of her own Conservative Party.

May warned EU sceptics with her party ranks that a rejection of her final throw of the dice threatened to boom Brexit for good.

This compromise solution “is practical,” May said. “It is responsible. It is deliverable. And right now, it is slipping away from us.”

The last vote on the Brexit deal in March was the closest. She lost that by 58 votes in the 650-seat House of Commons.

But most analysts and UK newspapers still give May little-to-no shot of winning on this occasion.

The vote also comes with the race to succeed her as party leader in full swing.

British media estimate that a third of her cabinet members have either openly declared their ambitions to become prime minister or are preparing their campaigns.

Her speech was billed by some as her possible swansong — and May conceded that her time in office has not been smooth.

“I knew that delivering Brexit was not going to be simple or straightforward,” May said.

“It has proved even harder than I anticipated.”