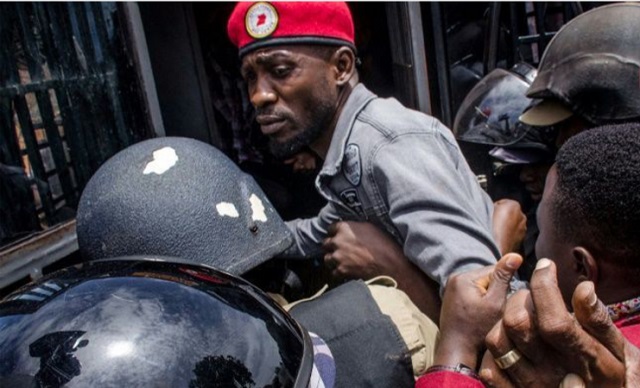 The concerts had been organized in the districts of Kampala, Lira, Gulu, and Arua from Easter Monday, April, 22 to May 5, 2019.  The events companies say that they had entered into an agreement with Bobi Wine and his crew to provide entertainment at 230 million Shillings through the Easter festivities.

The two companies had paid a non-refundable booking fee to Bobi Wine constituting half of the total cost for the four shows. However, they say that they have since suffered economic loss as a result of the cancellation of the concerts.

Through their lawyer Erias Lukwago, the companies contend that on March 25, 2019, they wrote to IGP requesting for security at the events.  In his response, the IGP asked them to seek clearance to use the intended venues, guarantee ambulance facilities, avail a list of performers at each venue and a detailed program for each activity.

But the promoters say that although they fulfilled all the conditions,  The IGP directed them to suspend the concerts with only two days to the D-Day.

They argue that the conduct of Police throughout the entire process was characterised with irrationality, illegality, procedural impropriety, bad faith and amounted to the violation of their freedom of liberty and economic rights enshrined in the constitution.

They now want the court to declare the actions of police illegal and unlawful on grounds that their constitutional rights to a fair hearing were allegedly violated.

They further want the court to issue an order stopping police and its agents from unduly interfering with their concerts. They also want an order for general and exemplary damages for violations of the rights and freedoms.

The case is yet to be fixed for hearing.