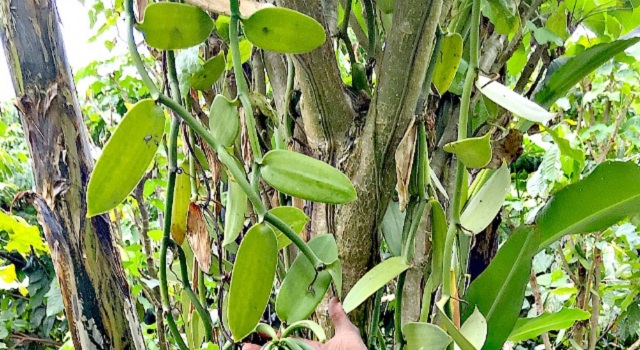 Kampala, Uganda | THE INDEPENDENT | The government has set harvesting dates for ripe vanilla beans in order to uphold high-quality produce ahead of the first season harvests.

Under the new government guidance to farmers, harvesting should commence from June 15 for the June-July season and December 15 for the December – January season.  It is hoped that the new dates will improve the quality of produce in the country and guarantee attractive prices at the farm gate and world market.

State Minister for Agriculture Christopher Kibanzanga says the government set the harvesting dates, as a temporal measure to improve the quality of harvest for the plant which remains one of the world’s most popular spices and an important ingredient in, chocolate and perfumes.

Uganda is the fourth largest global producer of Vanilla achieving up to 300,000 Kilograms of Vanilla in 2018 alone. Of this, 23,000 Kilograms was cured for export earning the country USD 6.4 Million in forex.  The major importing countries for Ugandan vanilla include USA, France, United Kingdom, Germany, Japan, Canada, Denmark, Netherlands, Israel, South Africa, Turkey and Hungary.

Kibanzanga says there are medium and long term measures being planned to boost production, harvesting and processing of Vanilla in the Country.

He cautioned farmers and exporters against involving in malpractices which affect production and quality including theft, harvesting pre-mature vanilla beans and de-colouring vanilla green beans through roasting. He said the government will prescribe tougher penalties for such people when caught.

Hajj Aga Sekalala Senior, the Chairperson of Uganda Vanilla Exporters Union says the absence of clearly spelt out Vanilla harvesting dates has been the single biggest hindrance to quality since the revival of Vanilla crop began some twenty years ago.

Hajj Sekalala says Vanilla farmers in some regions are developing by-laws to streamline production and harvesting of only mature Vanilla beans.   He says a farmer can recognize mature beans by looking at the Apex splitting up as they ripen for picking nine months after pollination.

Alex Lwakuba, the Commissioner for Crop Production in the Ministry of Agriculture, Animal Industry and Fisheries says Vanilla crops face multiple challenges including thefts of the beans, premature harvests and climate change.

Lwakuba says the government is planning to address some of the hindrances through policies and robust security reforms.

Madagascar is the largest producer of Vanilla achieving between 1,500 to 1,800 Metric tons per year while Uganda only accounts for about 5 per cent of the Global Production.