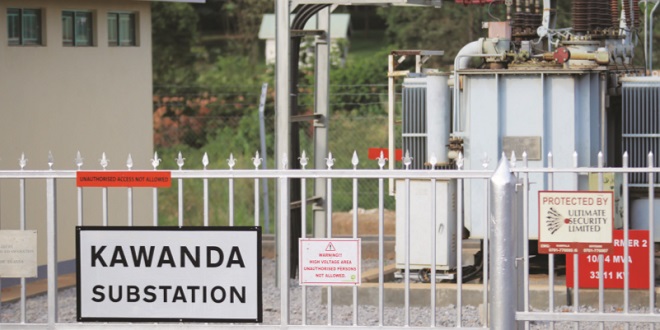 Kampala, Uganda | JULIUS BUSINGE | Patrick Bitature is a top businessman and entrepreneur in Uganda with interests in the energy, telecommunication, real estate, mining and hospitality sectors.

He has earned respect by chairing boards of several big business entities.

His rich experience in these areas is the reason why, whenever, he gives his two cents on a particular matter, it is taken seriously in business circles.

On May 09 at the Kampala Serena Hotel – Addis Hall, Bitature, who is also the Umeme Limited Chairman Board of Directors, flanked by the Managing Director, Selestino Babungi, revealed on the sidelines of the company’s 6th Annual General Meeting that the firm’s power distribution license – which has 5 years to go – would be renewed.

He also said there is need for players to invest more in the energy sector to match government’s development plan that is targeting energy, roads infrastructure and industry.

“We had a good year (2018) financially with a few challenges but we shall overcome,” Bitature said. “Government called us to renegotiate our concession.”

Amidst this solid financial performance, Bitature, however, said they are mindful of the fact that negotiations about a concession of 20 years requires time, experts in the legal, accounting and energy fields to avoid penning a bad deal for either parties.

“We are optimistic that negotiations will be concluded in the next 3-6 months,” Bitature said.

He said one of the items that Umeme is considering to admit is to reduce on their return on investment noted as 20% in the current concession so as to allow more money to go into strengthening investments in the sector and drive down tariffs.

He said renewing their contract at this time is critical given that government has recently commissioned the 183MW Isimba Hydropower dam and is about to commission the 600MW Karuma hydro power dam which will depend on their distribution infrastructure to reach final consumers.

Babungi said they expect further growth with the implementation of the government–led electricity connections policy that aims to achieve 80% access to clean energy by 2040.

Energy losses have reduced from 26.1% in 2012 to 16.6% in 2018. This, according to Babungi, has been achieved through deliberate investments in the distribution network to reduce technical losses and implementation of the commercial losses reduction strategy.

He said that since 2005 when they got the concession, the company has more than doubled the electricity distribution network infrastructure, quadrupled the number of customers connected to the grid, increased distribution efficiency to 85.5%, built organisation and staff capability.

The company is investing heavily in automation of the business processes, with technology to enhance operational efficiency.

However, he said there is a long road ahead to further propel electricity penetration to acceptable regional levels from the current 26%.

He said the continued investment in the network has met demand for electricity from various customers. For instance, demand increased to 9.1% in 2018 compared to a year before, with 3, 011 GWh of sales.

The demand was driven mainly by industrial customers, new customer connections and reduction in energy losses.

The company continued to focus on collecting existing bills and arrears from past sales as part of its strategy to improve the cash generation capability of the company.

Babungi said as the company commence the next regulatory period – 2019 to 2025, the electricity industry is growing at a faster rate and that they consider the key priorities being; expansion of the electricity distribution grid to evacuate the additional 783MW of generation capacity, creation of demand and delivery of reliable and quality electricity to industrial customers as well as increasing electricity penetration from the current 26% to 60% by 2027.

A total of two million new customers are projected to be connected to the electricity grid by 2025.

Other areas targeted include; efficiency gains through reduction in distribution costs per MWh, energy losses reduction, and revenue collections efficiency – that are important elements in determining the tariff.

He said more resources shall be required to service the increased customer base in addition to enhancing organisational capacity and human capital development.