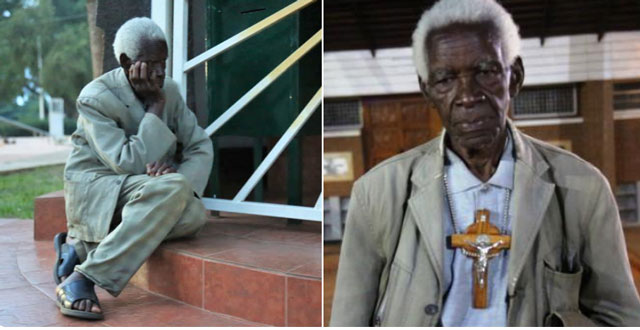 Kampala, Uganda | THE INDEPENDENT | The first group of foot pilgrims has arrived at the Uganda Martyrs Catholic Shrine in Namugongo. The group of 28 was led by a 91-year-old parishioner Bernado Tibyangye, to trek a distance of more than 300 kilometres from St. Kaggwa Catholic Parish Bushenyi District in Mbarara Ecclesiastical Province.

The group was welcomed by the promoter of the Uganda Martyrs in Kampala Archdiocese, Rev. Fr. Joseph Mukasa-Muwonge, amid songs of praises, ululations and drumming.

This is the fifth time that Tibyangye, a tea farmer, is leading the first group to arrive in Namugongo, according to records at the Uganda Martyrs Catholic Shrine Secretariat. Congregants were astonished by his courage and determination as he led the group towards the precincts of the Shrine.

Steven Kalikona, one of the group members told URN that Tibyangye has had a strong resolve and setting the pace for the rest, from the first day of the journey that took exactly 12 days. Kalikona says Mzee Bernado, led them in prayer and inspired them to stay firm as they walked in faith, braving the rain, cold nights and scorching sunshine on some days.

Tibyangye adds that although they have been taking more days to arrive in the previous years, this time around they persisted and kept matching in faith despite the harsh weather conditions.

Ben Muhooza, a vision group journalist who moved with the group from Bushenyi says Tibyangye was the pace setter and all the time determined the distance the group would cover on a given day.

Harriet Agaba, 49, the daughter to the old pilgrim who resides in Kampala was available to receive his father says that family members have always pleaded with the old man not to trek such a long journey but the latter has always kept a deaf ear.

Besides pilgrimage to Namugongo, the Nonagenarian has also visited Our Lady of Kibeho Shrine in Rwanda. Kibeho a small village in Rwanda is known as a place of apparition where the Virgin Mary appeared in 1981.

The Uganda Martyrs Day celebration usually attracts millions of enthusiastic pilgrims from across the world. Millions of these pilgrims usually travel by air, bus and many from inside Uganda’s border on foot to mark this celebration which transforms many people’s lives.

The June 3 celebration marks the commemoration of the heroic faith of the Martyrs, both Catholic and Protestants, who were burnt to death on the orders of Kabaka Mwanga II, the then king of Buganda between 1885 and 1887, for refusing to denounce their faith.