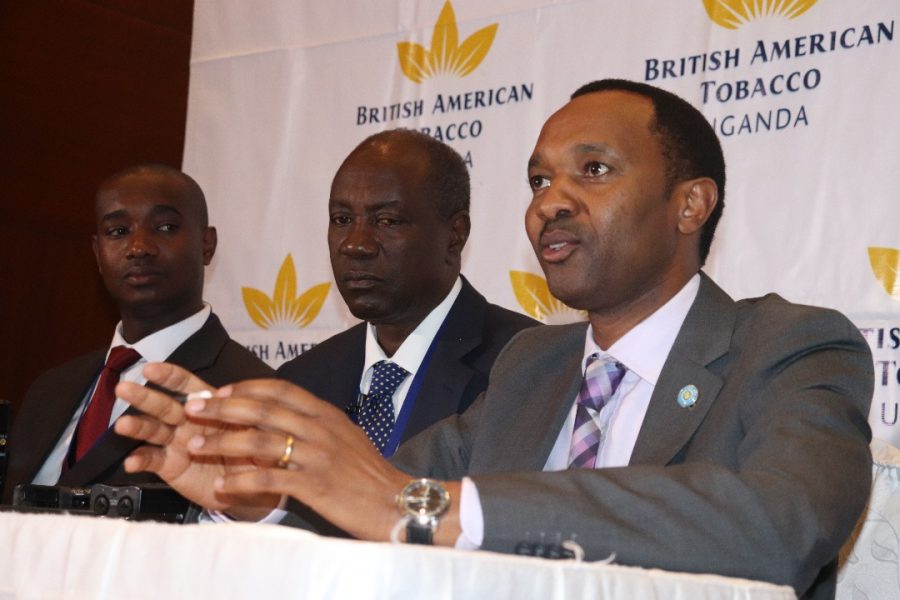 British American Tobacco Uganda (BAT Uganda) has announced that its shareholders will earn a total of Shs 13.7 billion as dividends for the year ended December 31, 2018.

This was during an annual general meeting convened at Kampala Sheraton Hotel on Wednesday during which BAT Uganda announced its 2018 performance results.

The meeting approved Shs 280 per share for the company’s shareholders which is a 14 percent increase from the dividend paid in the previous year (2017).

Speaking to the press, the Managing Director BAT Uganda, Mathu Kiunjuri said the company will pay the dividends in line with its policy of 100 percent dividend pay-out, subject to withholding tax on or before June 21 2019.

“The company delivered a strong set of results despite the trade in illicit cigarettes in the market, estimated for 22 percent of all cigarettes sold in 2018,” Kiunjuri told the press.

These worrying levels of illicit trade in the country not only impacted BAT Uganda’s business and consumers, they also deny the government significant revenues needed for the country’s economic development, he said.

He disclosed that the growth in profit is attributed to productivity initiatives which focused on the secondary supply chain with an aim to get more value for the shareholders. These reduced the expenses.

“We have stripped some of the costs in the secondary supply chain. There is a lot of stock held at the different points – at the company, third-party suppliers and distributors that we work with,” the MD said.

“We have optimized the stock holding within the chain and removed areas where we thought the stock wasn’t necessary. In holding that stock, you have to incur warehousing costs, you have to pay someone to transport the stock from point A to point B. So, if you remove that warehouse, you will save yourself the related costs”.

BAT Uganda’s Chairman, Dr Elly Karuhanga commended the company for maintaining a strong market position and delivering a strong business performance as-as result. In 2018, the company accounted for 80 percent of the market share.

Karuhanga however underscored the issue of illicit trade in cigarette which he said remains “a key concern for the business and the economy as a whole”.

“Despite the increase in tax remittances, we reiterate that illicit trade in cigarettes remains a key concern… We continue to call upon the authorities to take urgent action to investigate the source of these products and put in place the necessary measures and safeguards to ensure a wholly legitimate market for cigarettes”

He said that going by the taxes remitted by the company, the government is BAT Uganda’s biggest shareholder and “if we stopped the illicit trade by people who bring in cigarettes that don’t pay tax, the government would have earned another Shs 26bn making it Shs 116bn plus”.

BAT Uganda is a member of the British American Tobacco Group, the world’s first largest quoted tobacco company by global market share, with brands sold in more than 180 markets.

In Uganda, the company has been operating since 1928. The company is the largest buyer of Ugandan tobacco leaf supporting livelihood of over 13,500 tobacco farmers.