Inside Story: What Next as IGG Clears UIA ED Jolly Kaguhangire? 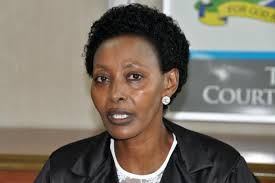 On July 4, 2018, President Museveni called a special meeting of Uganda Investment Authority (UIA) leaders and the board of directors.

Minister in charge of Privatisation Evelyne Anite attended the meeting.

High on the agenda was UIA board’s decision to interdict the authority’s Executive Director, Jolly Kaguhangire of alleged mismanagement.

Museveni asked the board why they had interdicted Kaguhangire.

The board led by Emely Kugonza gave several reasons which included failure to follow procedure in the recruitment of staff, alleged misconduct and irregularly allocating 8 acres of land to Hoima Sugar Ltd, Nile Fiberboard and Tasco Ltd among other reasons.

After listening to the board, Museveni responded: “But the issues you are raising are procedural. There is nothing material,” said Museveni.

“Let’s drop this because even my office has procedural issues,” he added.

The President further used the analogy of grass falling in a cup of tea.

“If grass falls in your tea, you remove it and continue drinking the tea. But if it is a fly, you pour the tea. In this case, I don’t see a fly. It’s just the grass. Let’s drop this and go back to work,” advised Museveni.

But the board members interjected, alleging, Kaguhangire had received a Shs 400m bribe to allocate 8 acres of land to Hoima Sugar Ltd, Nile Fiberboard and Tasco Ltd.

These companies are run by a bigger group known as Rai which also owns a huge stake in Kakira sugar. RAI has about 15 factories in Uganda.

Whenever a company applies for land, a committee sits to determine its financial strength, risks among others.

Kaguhangire had received the application and passed it on to the relevant committee.

An official at UIA told ChimpReports during the course of our investigation that upon receiving the companies’ request for land; the relevant committees did not do a lot of vetting because they belonged to an already established and multi-million dollar group – RAI.

RAI is among the top taxpayers in the country. President Museveni recently opened Nile Fibre Board Ltd, a new multi-million wood processing plant in Kinooni village of Kakooge Sub-County in Nakasongola District. The investment is owned by RAI.

But the whistleblower insisted that due diligence was not done properly to establish the risks related to the allocation of land to the investor.

Nevertheless, Museveni said there was no problem with Kaguhangire leaving office for three months pending investigations.

“Ok, please. Three months are not many. If that is what you (board) want, IGG can investigate. I will also do my own investigations and we compare notes after three months,” said Museveni.

The board appointed its select committee to investigate the matter.

Multiple officials revealed that upon conclusion of his private investigation, Museveni on October 26, 2018, wrote a draft letter to UIA board to reinstate Kaguhangire. The draft was still being processed at the president’s office when word leaked to UIA board.

Kugonza swiftly convened a meeting on the same day. Kaguhangire was called for the board meeting and informed her contract had been terminated.

She had to hand over immediately and leave. When Kaguhangire delayed to relinquish office, a hammer was used to break the lock of her office.

Officials said the developments at UIA at the time incensed president Museveni.

The report from the IGG, which would have been one of the grounds to determine Kaguhangire’s fate, was yet to be released.

Incidentally, internal audit reports had at the same time exposed the board in parcelling out land in industrial parks and issuing licenses to quack investors.

For example 450 acres could not be accounted for out of the 15,000 acres gazetted for the Kampala Industrial and Business Park commonly known as Namanve Industrial Park.

Kaguhangire had also launched an audit into management of UIA land and other property, and also submitted to the board a proposal for withdrawal of both land and licences from some 1,000 “ghost” investors in the system.

She had also notified directors that they had to reapply for their positions as their contracts were running out.

The swiftness employed by UIA board to sack Kaguhangire raised fears that perhaps they wanted someone at the helm of the institution who would not step in their plate.

In a dramatic turn of events, the Inspectorate of Government (IG) has now cleared Kaguhangire of wrongdoing.

In a letter dated May 7, 2019, the deputy IGG Mariam Wangadya cleared Kaguhangire of claims that she diverted funds from other activities of UIA to facilitate her excessive travels and failed to account for the funds.

“The approved budget for UIA for the FY 2017/18 submitted to the Finance Ministry amounted to Shs 10bn with Shs 281m being for travel abroad. The UIA incurred a total of Shs 255m on foreign travel out of which UIA paid a total of Shs 181m, leaving Shs 71m unpaid by November, 2018,” said the IGG.

The IG disclosed that some Investment Executives (IEs) who had been recruited did not have the qualifications specified in the advertisement for the post such as Bachelors’ degrees in Commerce, Economics, Business Administration, Entrepreneurship or an equivalent from a recognised institution.

“However, out of the seven IEs recruited, the following six held qualifications that were not specified in the online advertisement for the post,” Wangadya noted.

The board has since been directed by the IG to review the appointments of Mark Wagabula, Mr Simon Paul Ngabo, Ms Kara Tanya Komuhangi, Ms Alice Ndagire, Mr Adam Mutebi, and Ms Ida Dean Rwego “who did not have the requisite qualifications but were interviewed and appointed IEs.”

Officials at UIA, some of whom participated in the recruitment process, said the IG misunderstood the advertisement as it did not ring-fence positions for candidates of specific qualifications.

“What we normally do here is we highlight some of the qualifications for candidates but also encourage others with equivalent qualifications to apply. UIA a promotional agency. We ask for specific skills in a few specialized areas such as surveying, audit and finance. Positions of Investment Executives can be applied for by anyone with a Bachelor’s degree,” said a UIA official who preferred anonymity so as to speak freely.

Regarding bribery claims, the IGG noted: “There was no evidence found that the ED (Kaguhangire)  received Shs 400m in respect of the land ‘allocated’ to the three companies.’”

Wangadya also said, “There was no evidence that the ED allowed her spouse to use UIA resources for private work and sponsored his travel to Russia on official duty.”

Considering that the procedure for land allocation was not concluded by UIA’s investment committees, the deputy IGG recommended in her letter to the board that it should subject the companies’ applications for land to a fresh assessment to establish their eligibility.

“The UIA should ensure that evaluation procedures for applications for land are always followed as outlined in the guidelines,” said Wangadya.

A lawyer at UIA told us that the findings of the IGG quashing accusations against Kaguhangire have left the investment authority at crossroads since the board relied on the same claims to sack her.

However, UIA boss Kugonza said Kaguhangire will not return to UIA.

“If you look at what the IGG investigated, those are things contained in the whistleblower’s report but as management we also did our own investigations on which we terminated her,” he told the media recently.

But the lawyer at UIA who preferred to remain anonymous as he’s not authorised to speak to the media, said the facts investigated by the IGG and UIA board are the same.

“The IGG is a professional body tasked by the Constitution to conduct such investigations. Kaguhangire gave similar answers and facts to the select committee of the board and the IGG because I attended these meetings. Now that the IGG has cleared her, we need to see what will happen next,” said our source.

Kaguhangire was not readily available for comment as she didn’t pick calls to her known cell phone.

Minister Anite did not pick calls too.

However, ChimpReports has learnt that Anite recently blocked the recruitment process of a new Executive Director pending the formation of the new board which was inaugurated a couple of weeks ago.

Basil Ajer has been serving as the acting Executive Director since Kaguhangire’s interdiction in 2018.