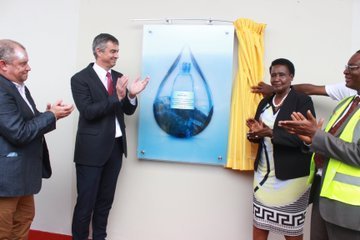 President Yoweri Museveni has said Uganda has all it takes to support maximum investment as it has all the elements of a good investment environment.

According to the President, the five most important elements for any investment to strive include good infrastructure that supports favorable costs of business, peace and security, raw materials, skilled workforce that is willing to work for a competitive market wage, and enabled consumers that can offer market for products, which are all available in Uganda.

“Uganda is on the right track for industrialization. What we need to do now is to focus on the four main sectors including services, ICT, commercial agriculture and industrialization” the President stated in a speech read by the Trade Minister, Amelia Kyambadde at the official launch of the new Rwenzori bottling line.

In the speech, Museveni applauded Coca Cola Beverages limited for the investment they have done in Uganda and for endeavoring to promote local products

“Investment is a key drive for achieving economic development and our ultimate goal of achieve developed economy class status. I am told Cocacola have made an investment of over $200m since the company was introduced in Uganda. This has helped in creating job opportunities and improving the economy” he stated

On Wednesday, Cocacola limited officially introduced a new 24000 bottles per hour Rwenzori bottling line at their production center in Namanve.

“There is still big potential in Uganda for the recycling sector. The recycling rates are still below the 50% target by government. This is an area that you can invest in” she said

Coca Cola officially started bottling Rwenzori water in 2014 after an agreement between Sabmiller PLC and Gutsche family investment (Majority shareholders in Coca Cola) to combine the bottling operations of their nonalcoholic ready to drink beverages businesses in southern and Eastern Africa.