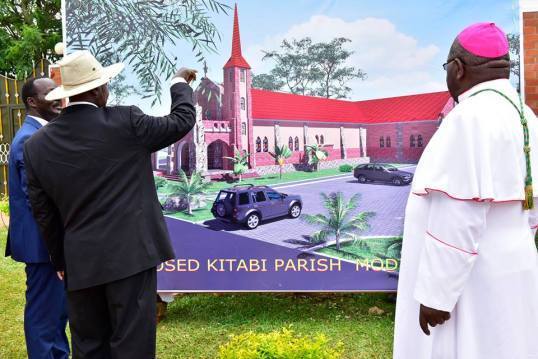 The celebrations shall take place on 29th June 2019, at Kitabi Parish, Bushenyi District and will be presided over by Paul K. Bakyenga, the Archbishop, assisted by the Clergy from the Archdiocese and other invited men of God from all over the world.

“The Archbishop of Mbarara Archdiocese, His Grace Paul K. Bakyenga, together with our brothers and sisters, of St Peter, Kitabi Catholic Parish, would like to invite our brethren from the greater Mbarara Archdiocese, the whole of Uganda and the world, to join us, as we mark and celebrate 100 years (Centenary) since the founding of our parish, on 2nd October 1919,” said the Archbishop.

According to Bakyenga other than the Centennial celebrations, the event is a 5 in 1 occasion that shall also include: Commissioning of the newly renovated 2000- seater church, Archbishop Paul K. Bakyenga’s 30th Episcopal and 75th Birthday celebration;

He noted that there will also be ordination of 3 deacons to priesthood: two of these are from Kitabi Parish.

The rock upon which Jesus has built his salvation for the last 100 years Kitabi Catholic Parish was established in October 1919 by the White Fathers Missionaries (now known as Missionaries of Africa).

It was officially inaugurated on the 2nd October 1919 during a Holy Mass presided over by the first parish priest, Rev. Fr. Edward Lafleur, from Canada.

At its founding it covered the present-day districts of Mitooma, Bushenyi, Sheema, and some parts of Ntungamo, Rukungiri, and Rubanda districts.

Today, Kitabi Parish is made of 16 Centres and 32 Hiikas and covers parts of Mitooma, Sheema and Bushenyi districts.

The present-day parish has also produced 19 priests and 59 nuns. The first ever priest to be ordained from Kitabi Parish was Rev Fr. Cyril Mbura, who was ordained on 17th July, 1951.

During its lifetime and with the support of the Diocese and other well-wishers, the church in Kitabi has been instrumental in not only the spiritual nourishment of its parishioners, but has also played a great role in the education of the children of the nation (both Catholics and non-Catholics) through establishing and hosting a number of educational institutions, that among others include: St. Francis Xavier Seminary, Kitabi, St Cecilia Girl’s Vocational School, Kitabi Demonstration School and St Charles Lwanga Senior Secondary School.

These institutions have produced great women and men that have gone on to serve Uganda in different religious, government and private sector vocations.

It is these key milestones and foundations on which the parish stands, that make the 100 years, worth celebrating.