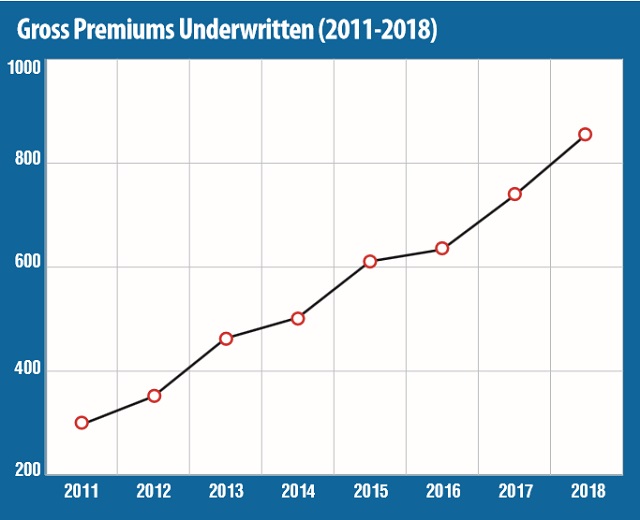 Insurers record a 17.5% growth in gross underwritten premiums to Shs856bn in 2018

This is more than double insurers recorded in 2012 when gross underwritten premiums stood at Shs351.23bn.

Financial results released on May 09 also show that non-life business continued to dominate the insurance industry in terms of composition, though its relative share has continued to decline over the years.

The relative share of non-life business in total premium declined almost four percentage points from 70% in 2017 to 66.6% in 2018.

Though life insurance attracts less business volumes, it continued to grow relatively faster at 28.6% to Shs216.9bn during the period under review.

On the other hand, non-life insurance business recorded a 12.3% growth in gross underwritten premiums to Shs570bn. Health Membership Organisations (HMOs) that include, among others, Case Medical Clinic, International Air Ambulance and AAR recorded a 31% growth to Shs69.1bn.

Similarly, the industry’s net asset base increased by 11% from Shs458bn to Shs508bn signalling a growing strength of insurers to handle more insurance risks locally as well as provide adequate protection to the insuring public.

Claims payments which is the core value that the insurance industry offers to the policyholders and beneficiaries increased by 11.9% to Shs326.7bn.

Ibrahim Kaddunabbi Lubega, the Chief Executive Officer at the Insurance Regulatory Authority of Uganda (IRA-U) said innovations into the development of customer-centric products and strategic partnerships have improved both product affordability and accessibility.

He also said the company’s redress platform, Complaints Bureau, has enhanced public confidence in insurance as the public is now aware that there is a dependable agency to seek for help in case of a challenge.

Last year, the Complaints Bureau received 153 complaints compared with 139 in the previous year, as at the end of last December, 101 cases had been resolved.

Uganda’s insurance industry has 32 insurance companies, one micro insurance firm, one re-insurer, and five HMOs. In addition, the industry has 14 commercial banks and two credit institutions that have been granted license for insurance products in partnership with the insurers.

The insurance industry is expected to remain on a positive growth curve in 2019 owed to the projected growth of the economy, according to Kaddunabbi.

“Increased investment in infrastructure investment such as Standard Gauge Railway, oil pipeline, Uganda Airlines and the CCTV cameras in metropolitan Kampala should further stimulate the market to form consortiums to underwrite these risks,” he said, “the country’s reforms to improve business environment will drive stronger growth over the short and medium term.”