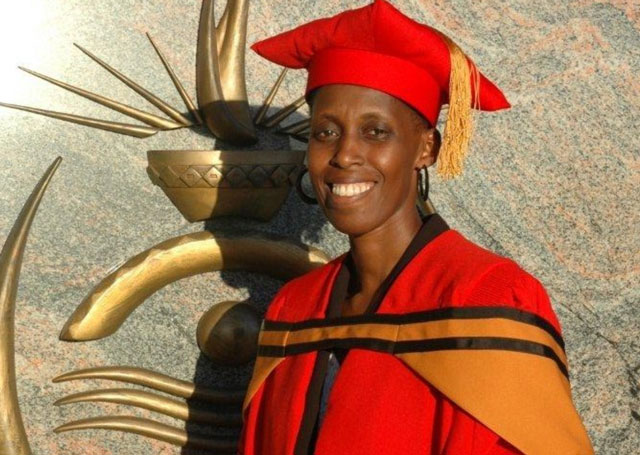 Kampala, Uganda | THE INDEPENDENT | The Uganda Christian University Council on Thursday May 23, 2019 approved the promotion of Dr. Monica Chibita to the rank of full professor.

The UCU Council said in a statement that Prof. Chibita “has not only shown to be a consummate academic, but very importantly a leader who grows her team. During her time at UCU, she has worked to train five PhD’s in a partnership with two institutions in Norway and South Africa.”

Prof. Chibita, 56, is only the second homegrown full professor that the Uganda Christian University Council has promoted during her 22 years of existence.

She is now also only the second communications professor in the country after Dr Nassanga Goreti Linda, professor at the Journalism and Communication Department,  Makerere University.

Dr Chibita joined Uganda Christian University in 2012 from Makerere at the rank of Associate Professor. She became Head of Department of the Mass Communications Department, which she has since worked to grow into the Faculty of Journalism, Media and Communication (FJMC) –

Before this appointment, “she has presided over this phenomenal growth while at the same time growing her own academic achievements. It is a laudable accomplishment when a dean holding her heavy administrative duties simultaneously researches and publishes to grow academically,” the UCU Council statement said. “We celebrate her achievement with glowing pride. Thank you Prof. Monica Chibita. The LORD bless you.”

In order to rise from Associate Professor to Professor at Uganda Christian University, one needs to have a doctoral degree from a recognized university, a minimum of eight years of teaching at an institution of higher learning, outstanding skill and effectiveness in teaching, advising and research.

A candidate is also expected to have supervised at least five graduate students to completion since appointment to rank of Associate Professor, presented work at public fora, completed consultancies and published at least five journal articles, chapters or a book. The application is then vetted by one internal and three external people, at the rank of professor – at least two of them with international standing.

“I have always loved teaching, and working with young people, so being in higher education is a natural thing for me. The journey to professorship started when I joined Makerere as a Lecturer in 1994. From a very early stage, I was committed to growth,” she said after the news emerged that she is now a full professor.

“Professorship, I am convinced, should not be seen as an end in itself but as an advanced  platform for continuing to contribute, in however small a way, to the many challenges of society.”

Her numerous research and academic works include a co-edited book, Salawu, A. and Chibita, Monica B. (eds.). 2015. Indigenous language media, language politics and democracy in Africa.

She has co-edited the African Journal of African Media studies since 2006, and sits on several other Journal’s Advisory Boards.

Her online publications include Chibita M. B. 2010. Ugandan radio as a political space and the regulation thereof  (click to read) iese.ac.mz/lib/publication/proelit/Monica_Chibita.pdf and Chibita, M.B. 2010. Media practitioners as a force for social change http://themediaproject.org/article/media-practitioners-force-social-change

Swimming, singing, church and aerobics occupy the spare time of this mother of three boys and two girls, who is married to Mike Chibita, Uganda’s Director of Public Prosecutions (DPP).