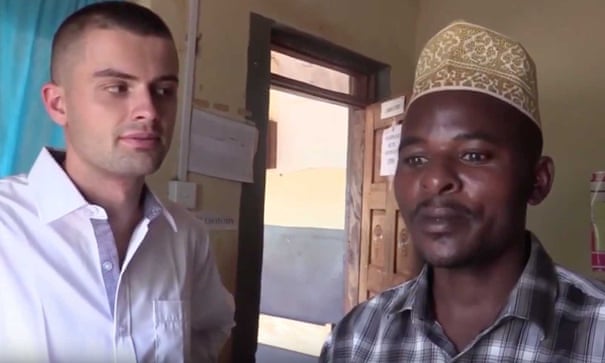 A British man has been arrested in Uganda on suspicions of “intoxicating the public” after he claimed to have carried out a trial of a “miracle cure” on local villagers using industrial bleach.

Sam Little, 25, from Arlesey in Bedfordshire was picked up by Ugandan police at 6am on Thursday in a village church in Kitembi, a few miles outside Fort Portal in western Uganda. Also arrested were two Ugandans who are suspected of being involved in the distribution of the bleach, which is known by advocates as MMS or Miracle Mineral Solution.

The arrests come five days after the Guardian exposed a massive distribution network of MMS in poor areas of Uganda that was being supervised by an American pastor from New Jersey. The network by its own estimation was handing out quantities of the bleach to up to 50,000 Ugandans every month and telling them that it was a cure-all for almost every serious disease including HIV/Aids and cancer.

Little supported the network with a donation of $10,000.

In the wake of the Guardian’s reporting, the U.S government put out an official warning in Uganda. The U.S mission, an outpost of the US embassy in Kampala, issued a public statement saying that it was aware of reports that MMS was being distributed by an American pastor in the country and stating: “We strongly condemn the distribution of this substance, which is extremely dangerous and is NOT a cure for any disease.”

The Guardian revealed that Robert Baldwin, an ordained pastor from Burlington in New Jersey, was importing into Uganda bulk shipments from China of the chemical components of MMS. He was then training hundreds of priests across the country on how to mix the components to make chlorine dioxide, a bleach used in the textile industry.

Baldwin was offering smart phones to pastors who were particularly “committed” to distributing the “miracle cure” to their sick congregants.

After the Guardian story appeared Baldwin took down the website of his “Global Healing” ministry as well as his personal Facebook page where MMS – which he called “healing water” – was promoted. He told a local New Jersey newspaper that he was being “demonized” by people who do not understand the science behind natural medicines but went on to insist such medicines could cure the world’s deadliest diseases.

Ugandan police from Rwenzori arrested Little along with two Ugandans. The police told the Guardian in a statement that they were being held “on allegation of intoxicating the public with a chemical named miracle cure solution (MMS) believed to be known as Chlorine dioxide”.

Exhibits had been seized including liquids and investigations were ongoing, the police said.

The police also issued a plea to local Ugandans: “We strongly appeal to the general public and in particular the Christian community to be careful and report any suspicious activities in line with the above and urge the victims to come up and assist police in investigations.”

An eye witness told the Guardian that Little and his friends were interviewed at Fort Portal police station.

A spokesperson for the Uganda ministry of health said that if the allegations were substantiated, Little “must face the law. Samples of the chemical concoction have already been obtained by Uganda National Drug Authority and security agencies for testing”.

The two Ugandans who were arrested were understood to be connected to MMS Uganda, a group that is in turn a part of Genesis II – a pseudo-religious outfit in the US that sells “miracle cure”, which it calls a sacrament.

During his police interview, Little is believed to have said that he made a donation to the American pastor but had no further involvement in the network. “I donate money to Robert’s charity. What he does with that money is not my responsibility,” he said.

Before his arrest, Little conducted what he called a “trial” of MMS bleach on nine Ugandan patients at a small Ugandan hospital. In a video, he claimed the trial had proven that malaria could be cured using chlorine dioxide within two hours

He told the Guardian before the paper’s report appeared that he was also conducting similar trials on people with HIV/Aids in various locations across Uganda.