U.K’s PM, Theresa May Announces She Will Resign June 7 Amid Brexit Pressure 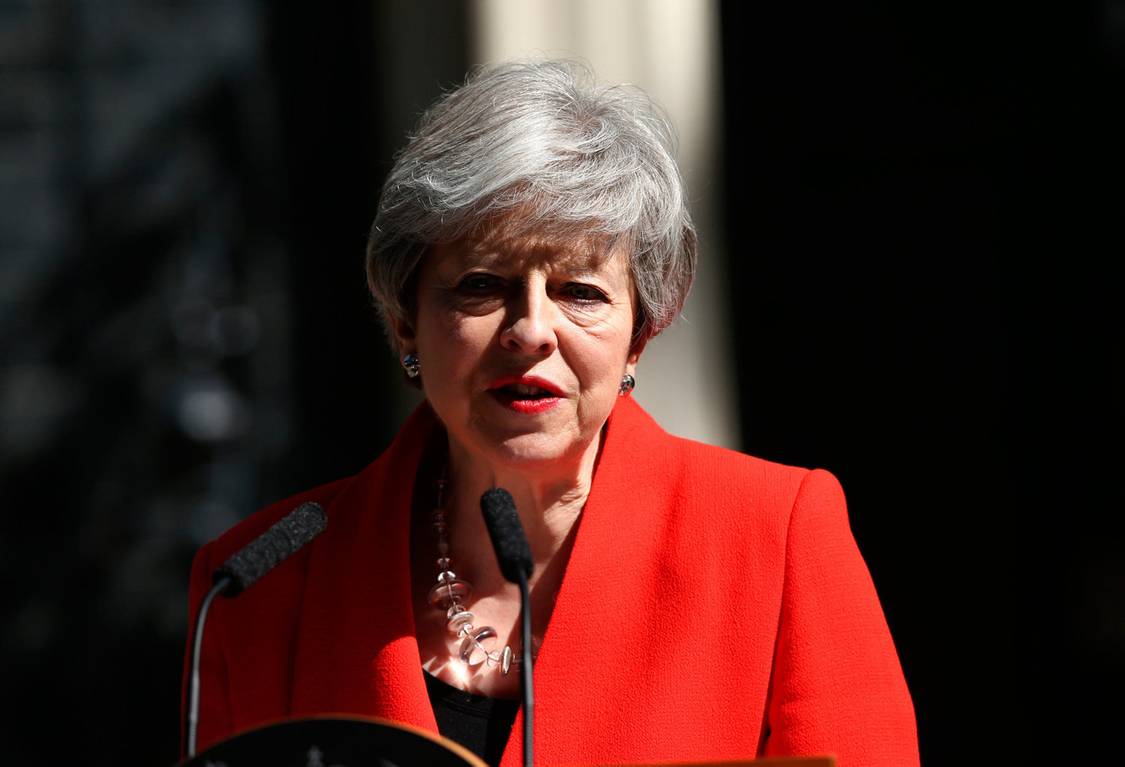 British Prime Minister, Theresa May has announced she will resign her role on June 7 amid mounting pressure and resistance from the opposition who have repeatedly rejected her strategies of leaving the European Union – Brexit.

Theresa May became U.K Prime Minister in 2016 three months after U.K voters backed plans to exit the European Union (EU) in a referendum. Her premiership has been consumed by the attempt to deliver on that complex decision.

For the last three years, she has attempted to navigate the difficult and complex process of exit but in the face of extreme opposition in the British Parliament.

“I feel as certain today as I did three years ago that in a democracy, if you give people a choice, you have a duty to implement what they decide,” May said on Friday as she made the announcement at 10 Downing Street in London.

In an emotional statement, May said she will resign as Conservative leader on June 7, but will remain as prime minister until her successor is chosen.

She said she negotiated the terms of  UK’s exit from the EU and a new relationship with its closest neighbours that protects jobs, security and our Union.

“I have done everything I can to convince MPs to back that deal. Sadly I have not been able to do so. I tried three times. I believe it was right to persevere even when the odds against success seemed high”.

She said “it is now clear to me that it is in the best interests of the country for a new prime minister to lead that effort”.

Her statement on Friday came shortly after meeting with Graham Brady, a powerful leader of backbench Conservative lawmakers.

She has faced immense pressure within her party and outside for her Brexit plan. But the pressure on her increased after disastrous local election results this month, when the Conservatives lost more than 1,300 seats in municipalities around the country and voters vented their frustration over the Brexit infighting and deadlock.

In November 2018, May struck a divorce agreement with the EU, setting out the terms of Britain’s departure and establishing a transition period of almost two years for the two sides to work out their future relations.

But the agreement was rejected by both Brexiteers and Remainers. The former felt it gave too much away and left Britain bound to EU rules while those in support of staying in the EU wanted a softer Brexit that kept close economic ties to the bloc.

In January, May’s deal was rejected by 230 votes, the biggest government defeat in British parliamentary history.

This week as House of Commons Leader Andrea Leadsom quit and several Cabinet colleagues expressed doubts about her Brexit strategy.

Britain is currently due to leave the EU on Oct. 31, but Parliament has yet to approve divorce terms. While her resignation will be welcomed by Conservative lawmakers, her successor will likely face the same challenge.