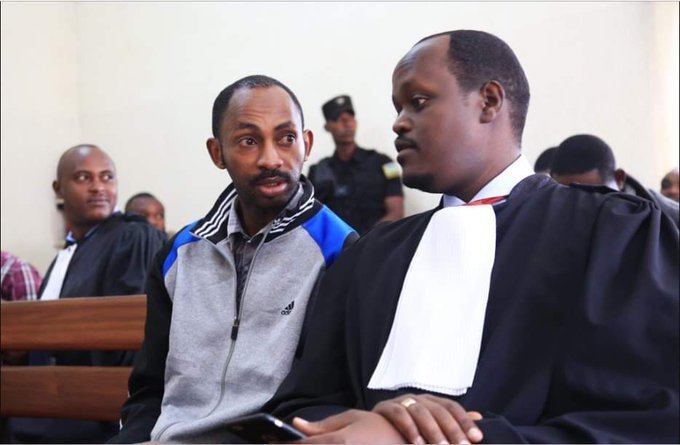 Uganda has responded to accusations that the Chief of UPDF Military Intelligence, Brigadier Abel Kandiho, is involved in a plot with Rwandan rebels to overthrow President Kagame – saying such claims should be addressed through diplomatic channels.

“We have taken a diplomatic path on that matter,” said Defence spokesperson Brigadier Richard Karemire when contacted by ChimpReports on Friday morning.

“We have a diplomatic channel and mechanisms through which we can have a conversation on those matters and others,” he added.

Sankara was until recently the spokesperson of FNL which launched attacks in which nine people died in Nyungwe forest.

On his first appearance in court, Sankara pleaded guilty to all the charges before seeking forgiveness from President Paul Kagame.

He said he had given FNL combatants orders to attack military positions and other strategic assets but not innocent civilians.

In court, Sankara alleged he was helped by a one Major Bertin aka Moses; Burundi’s External Intelligence Officer and a Ugandan Captain Sunday Charles to meet Kandiho.

“We met Ugandan military officials. There was a scheduled meeting with Brig. Gen. Kandiho but on the day of the meeting, he had an emergency so he sent a Colonel. We requested for military and diplomatic support and by the end of the meeting we were given a positive answer,” Sankara was quoted as admitting in court.

He said by the time he was captures, his team was in the process of returning to Uganda to collect what was promised to them.

Sankara did not reveal when or where in Uganda he met UPDF officials.

The development comes against the backdrop of heightened tension between Uganda and Rwanda.

He added: “During his trial, Callixte Nsabimana pleaded guilty on all 16 charges against him. He informed that he was facilitated by Major Bertin a.k.a Moses, Burundi’s External Intelligence Officer, to meet Brig Gen Abel Kandiho…”

Brig Karemire opted not to direct respond to the specifics of the accusations, saying, “Our prayer is that we keep it (issue) under that (diplomatic) framework.”

The army publicist added: “We have a strategic vision. We can’t be party to any conduct that could jeopardize that vision of integration.”

ChimpReports also contacted Burundian authorities to respond to the accusations.

A high ranking Burundian government official, who preferred anonymity so as to speak freely, said while the country runs an external intelligence organ, “we do not have and have not had anyone known as Major Bertin. This person is not known to us.”

The official added: “May be the Rwandans can tell you who that Bertin is. We don’t know him.”

Both Kigali and Bujumbura accuse each other of plotting to destabilize their respective governments.

On the other hand, Burundi accuses Rwanda of plotting, directing and financing the botched 2015 coup in Bujumbura that sought to overthrow President Pierre Nkurunziza.

Bujumbura also accused Kagame of providing a sanctuary and training to planners of the failed coup to further destabilize Nkurunziza’s government.

Both countries deny the counter accusations.

Sankara, who was represented in court by his lawyer Moise Nkundabarashi, has since Denounced his rebel movement which he earlier this year said had registered key successfully military victories against Rwanda Defence Forces (RDF).