Afande OJ The Policeman whose music is inspired by Bobi wine 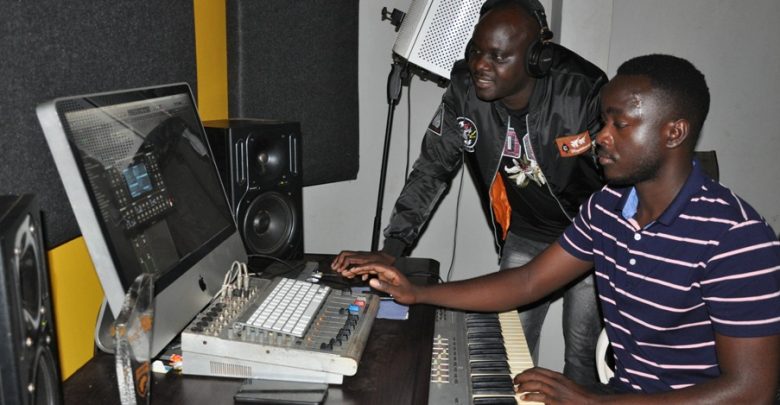 The Uganda Police Force has been caught so many times in human rights violations, that over the years, it has become synonymous with brutality and excess.

According to a 2017 Uganda Human Rights Commission (UHRC) report, out of 754 human rights-related complaints filed at the body, Uganda police was responsible for 419.

As such, I had this at the back of my mind when I set off to meet Inspector of Police Samuel Ojobira, at his residence in the Kampala suburb of Seguku.

After snaking my way past sprawling bungalows and muddy roads I finally found his home, a modest house built on a glide in one of the low lands there.

Meeting him, one can’t help wondering what this seemingly good policeman is trying to achieve on the social scene.

Music and O.J have intertwined like Siamese twins since early schooling years.

It was here that his singing talent was nurtured as he became active in the school and church choirs.

But with no funds and support his career, he opted to join the Uganda Police Force in 2007 and was passed out in 2008.

He fully settled into his new job as a trainer at Kabalye police training school.

But occasionally when opportunity availed itself, he would perform for his fellow officers.

That was all until one day while then Inspector General of Police (IGP) Gen Kale Kayihura was touring Kabalye, and he happened to capture his attention.

Amused and gleeful Kayihura recommended that Ojobira be transferred to Police’s music department to head the jazz band.

On top of that, Ojobira was instantly promoted from the rank of sergeant which he had attained two weeks back to Inspector of Police he holds to date.

“Gen Kale Kayihura actually was inspired by my music. Reason is he wanted to encourage officers to be innovative and creative”, he says.

Things would turn for the better from thereon.

In August 2016, together with a colleague known as Afande Miah, they released Kazi Yetu, a song that talks about the great work done by police in protecting their motherland.

As the song thrived on YouTube in 2016, BBC flew in reporters to Uganda to capture his unique story.

This song also earned him a nomination at the 2017 HiPipo Music Awards in the best afro-pop song of the year.

Ojobira followed this up with another single, Physically Fit which talks about how policemen are able to serve Ugandans at all costs.

As he goes on and on in our interview at the front porch on two neatly woven papyrus chairs, I ask the officer who inspires him musically both locally and international. After a brief lull of hesitation, he says Bob Marley and Lucky Dube.

As for his old music idle in Uganda, he names Kyadondo East MP Hon. Robert Ssentamu Kyagulanyi aka Bobi Wine.

That was followed by a pause and a hearty laugh.

“He is so strategic in his way of doing things and that is why I think he has made it in life. By the way, he is not poor; he is one of the guys who have really made it in life and in music”.

When I ask him whether the public has been receptive to his music, Ojobira says wherever he has performed, people have received him enthusiastically.

“Right out here it may seem that people don’t support police but it’s a different story when I get on stage. My performances are very energetic and unique. Whenever I perform I have had people hand me money on stage.”

“People are excited and feel this is something that is new. Uganda police is not just all about guys carrying batons and teargas but also is a custodian of music”

Besides the public, the officer says fellow artistes have been so helpful as well.

Since 2017, Ojobira has been working at the Uganda Registration Services Bureau (URSB) Intellectual Property department. He describes his bosses as amiable and considerate.

“Whenever they have functions they have me to entertain the guests. Whenever I get bookings, they have always given me permission to go and perform”, Ojobira retorts.

Among producers he has so far worked with include; Washington Ebangit, Ronnie Da Don of Hinterland Music, Big Nash and Kaysam Ku Mapeesa.

He now plans to work with Nessim. Nessim is the sensation behind some of artistes’ A-Pass, Feffe Bussi, and Good Life hit songs.

He says among his achievements include meeting President Yoweri Museveni on a crime prevention tour in Kasese.

The President handed him an envelope and promised to meet him in person, which he still awaits.