Bobi wine in Zimbabwe to headline the MDC Congress 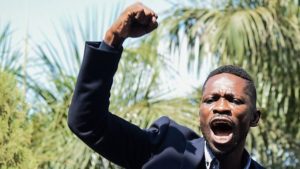 Ugandan Member of Parliament Robert Kyagulanyi Sentamu (Bobi wine) is in Zimbabwe for the MDC congress in Gweru where he is expected to headline the congress as an official guest.

Fighting the long term rule of Ugandan dictator Yoweri Museveni, Chamisa said Bobi wine has been arrested, tortured and declared an enemy by President Museveni landed in Harare yesterday along with delegates from Swaziland, Kenya and South Africa.

The congress is reaching out, connecting with progressive democrats and redefining the MDC not as only alternative but as a major diplomatic player by connecting with brothers and sisters on the continent that believe in democracy.

At the congress are voices of young African revolutionists who have come with the real African change strategy to end dictatorship and impunity on the African continent.

Details about the congress are yet to come.