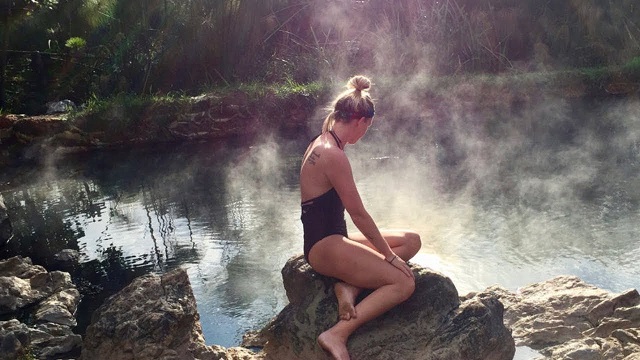 Kampala, Uganda | THE INDEPENDENT | Kitagata hot springs in Kitagata town council Sheema district are in a bad shape despite being a destination for hundreds of tourists and residents.

The hot springs are adored by local and international tourists who throng the area. While some people visit the springs for adventure, others visit for healing purposes.

Each visitor pays Shillings 1000 to access the springs. However, the hot spring is being affected by silting, irresponsible waste disposal, lack of privacy and inadequate places of convenience.

Nazario Bishanga, the chairperson at Kitagata Hot springs, says that run off Water from Ngaro Mwenda stream, which often bursts its banks ends up in the springs.

He says the two stance latrine, which is used by the visitors is insufficient to handle the large number of guests forcing some of them to uses bushes.

He also says a problem of insecurity has cropped as thugs target the property of visitors flocking the area.

Bishanga also says they have a challenge of accommodation facilities to carter for the elderly and Persons With disability.

He says the available wooden structures are already rotting away and some are in a very bad shape and unfit for habitation.

Johnson Turyagumanawe, a resident of Kitagata says the biggest challenge has been the failure by the town council authorities to develop the place despite collecting revenue from the hot springs.

Cyril Habaasa, who hails from Rukungiri and often visits the hot springs, says the state of the hot spring is appealing and unfit to be called a tourist destination.

He says the irresponsible disposal of waste and absence of key requirements such as clean water and accommodation among others clearly shows that the authorities are milking a cow that they don’t feed.

Isaac Mushabe, the speaker Kitagata town council, says the leadership is equally concerned about the current state of the hot springs.

He says that they are in discussions with the tourism ministry to guide them before money is invested in the area.

Mushabe says they are mobilizing resources to provide security at the hot springs to secure tourists and their belongings, which will be followed by the construction of a hostel.