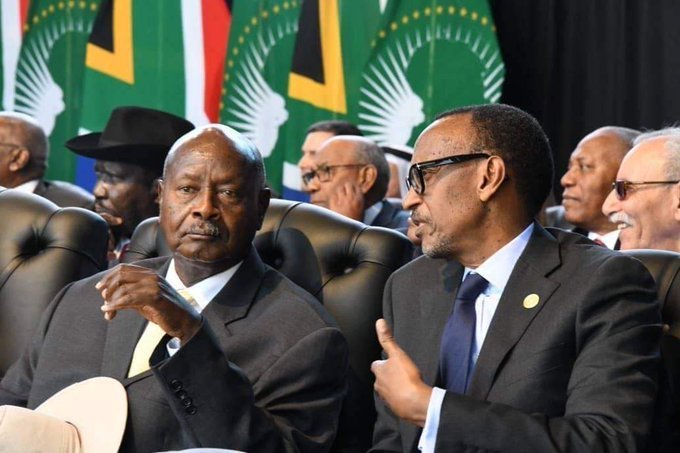 The leaders met physically for the first time since March of last year, at the inauguration ceremony of South African President Cyril Ramaphosa, who today commenced his 5-year tenure.

Museveni and Kagame sat next to each other during the ceremony at the Loftus Versfeld Stadium in Pretoria, and were photographed exchanging rather comfortably.

This sitting arrangement is strongly believed to have been preconceived by Pretoria.

President Ramaphosa who has personal connections to Uganda, has in the first months of his leadership shown interest in pacifying the Great Lakes region.

Museveni and Kagame’s meeting came hours after a significant escalation of the tension between Uganda and Rwanda.

Last night, the Rwandan military shot and killed two people, a Ugandan and a Rwandan, on the Ugandan side of the border.

The Rwandan victim was a businessman attempting to cross back to Rwanda with smuggled goods, whereas the Ugandan was one of the people that came to intervene.

The incident is being discussed by the Uganda National Security Council.

Kigali among others accuses Uganda of hosting and supporting forces that are working to overthrow Kagame’s government.

President Paul Kagame has on more than one occasion spoken out about the bad blood with Uganda, and accused President Yoweri Museveni of shunning talks.

Details of what the two leaders discussed in South Africa are yet to come out.