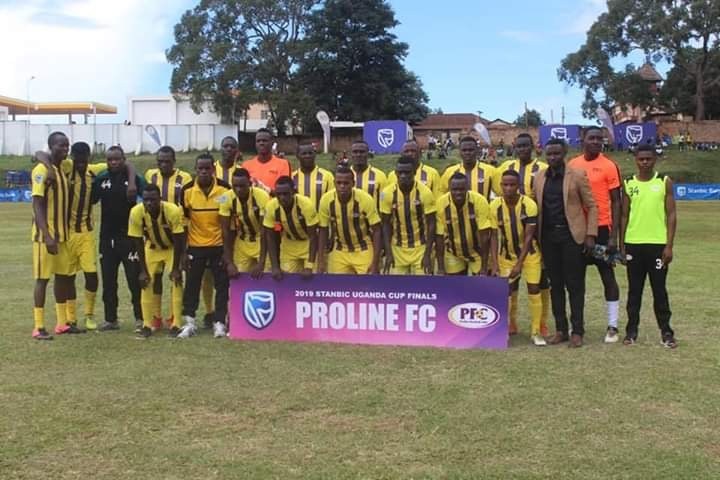 Proline FC has become the first team from the lower tiers to win the Uganda Cup after edging Bright Stars to claim this season’s title.

The lowly-attended final was played on Saturday afternoon at the Masaka Recreational grounds in Masaka.

Bright Stars captain Nelson Senkatuka curled in a beautiful freekick immediately after the breather to give the Kawempe side the lead.

Proline kept pressuring their seniors with endless attacks which finally yielded in the dying minutes. Mustapha Mujuzi calmly planted in from the spot after  Walusimbi handled inside the box.

The match ended a few minutes after with the centre referee Ali Sabila signalling for the kicks from the penalty mark as required in the regulations.

Mujuzi, who had earlier on converted for the equaliser took the first chance and sent it in.

Frank Katongole, Sam Sekito, Rajab Kakooza and Methodius Jjungu started well for Proline but it was their star player and captain Nelson Senkatuka who disappointed when it mattered most.

The Uganda Cranes trialist banged his kick on the lower right but Hassan Matovu stretched to his limits and blocked it after making the right guess.

Proline win the tournament for the first time ever, drive back with Ushs. 40 million and book themselves a chance to represent Uganda in the 2019-2020 CAF Confederations Cup.