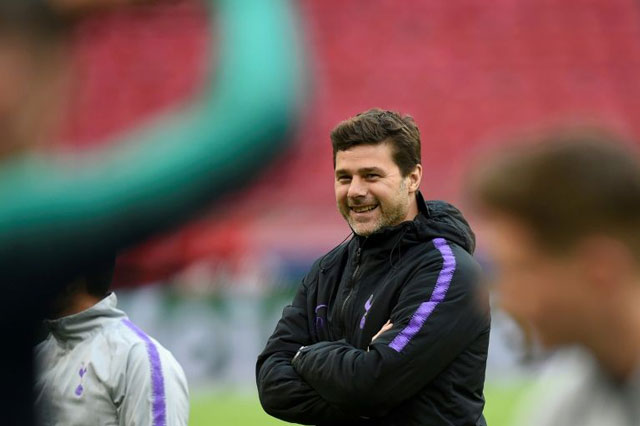 Madrid, Spain | AFP | Real Madrid have reacted angrily to Mauricio Pochettino suggesting they turned down a request from Tottenham to stay at their training ground next week ahead of the Champions League final against Liverpool.

Spurs will train at Valdebebas on Thursday and Friday before the game on Saturday and Pochettino, in an interview with Spanish radio station Cadena Cope, said the club had asked Madrid if they could also sleep on the site.

In a light-hearted part of the interview, Pochettino was asked if Tottenham’s players would also stay at Valdedebas. Pochettino replied: “No we will stay in an hotel near there. We have asked eh? We have asked but Florentino (Perez) didn’t want to allow us.”

A laughing Pochettino then added: “He would say, ‘the day you coach Madrid is when you can sleep there’. This is the subliminal message no?”

Real Madrid released a statement on Friday, insisting they had received no such request from Tottenham.

The statement read: “Real Madrid is surprised by the suggestions made by Tottenham Hotspur coach Mauricio Pochettino about a supposed request made to our club asking that his team could stay at the Ciudad de Real Madrid before the final of the Champions League.

“Real Madrid wants to make it clear it is completely false that this request occurred. Our club has always shown its absolute availability to meet all the requests made by UEFA, the Spanish Football Federation, Atletico Madrid, Liverpool and Tottenham Hotspur.

“All requests submitted to Real Madrid have referred only and exclusively to the use of the training pitches of the Ciudad de Real Madrid and its changing rooms. And all of them have been granted by our club.”

The statement added: “Real Madrid also wants to emphasise the accommodation of the Champions League finalists are assigned by UEFA depending on organisation and security. And that at no time has our club been asked to accommodate them in the facilities of the Ciudad de Real Madrid.”

Pochettino was heavily linked with the vacant position of Real Madrid coach last season when Julen Lopetegui and then Santiago Solari were sacked.

Asked about taking charge of Madrid in the future, Pochettino said: “I have no other goals than to coach Tottenham, I don’t allow myself to think about the long-term.”

Liverpool will also use Real Madrid’s training ground on the morning of the final, which will be played at Atletico Madrid’s stadium, the Wanda Metropolitano.