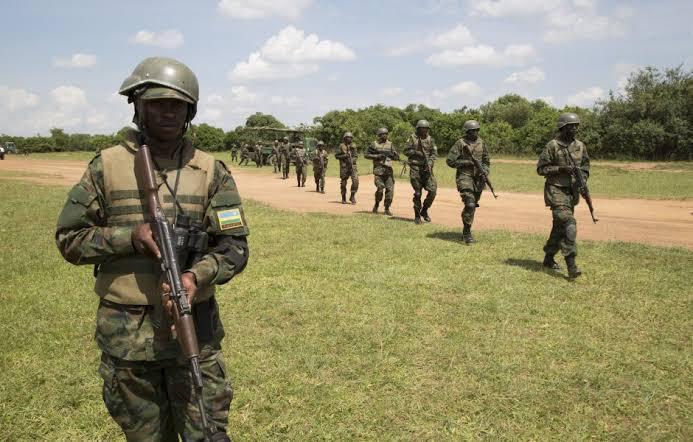 At least two people were shot dead last night by the Rwandan military at the Uganda – Rwanda border.

Uganda Police this morning confirmed that two men, a Ugandan and Rwandan were killed in the shooting.

The incident, that’s believed to be connected to the continuing diplomatic row between the two countries, happened at Hamisavu trading center in Kamwezi Sub County, Rukiga District.

The matter is currently being handled by the heads of Ugandan security bodies under the Uganda National Security Committee.

Enanga says Nyengye had attempted to cross back into Rwanda on a motorcycle loaded with his merchandise, but turned back upon noticing security presence across the border.

“He was however, chased and intercepted by two armed Rwandan soldiers, at a distance of about 80 meters into Ugandan territory, at Hamisavu trading center,” he said.

Enanga says Nyengye resisted attempts to arrest him, and was shot to the head and killed instantly.

The soldiers also shot dead a Ugandan who police identified as Alex Nyesiga, who was trying to intervene.

“They (soldiers) immediately withdrew, after failed attempts to remove the body of the Rwandan victim,” Enanga said.

“The two bodies were transferred to Kamwezi Health Centre IV for post-mortem analysis.”

The Police mouthpiece in a statement, voiced Uganda’s condemnation of what he termed as “violent acts of killing innocent civilians with impunity, regardless of their immigration status.”

“In this very instance, there was no justification for the illegal entry and use of deadly force by the Rwandan military, due to the presence of alternative, adequate and effective remedies available at our disposal.”

Enanga says Uganda has had cases of Rwandans entering the country illegally, but has not hurt any of them.

“For instance, in the recent past, Rwandan nationals who had illegally entered Uganda, were intercepted in Kasese district and deported to Rwanda in a very peaceful manner.”

The matter according to Enanga has been handed over to the National Security Committee and Ministry of Foreign Affairs.

In the meantime, the Police urged the Rwandan authorities, “to respect the rights of citizens along the border and avoid acts of provocation that can easily destabilize the prevailing peace along the border.