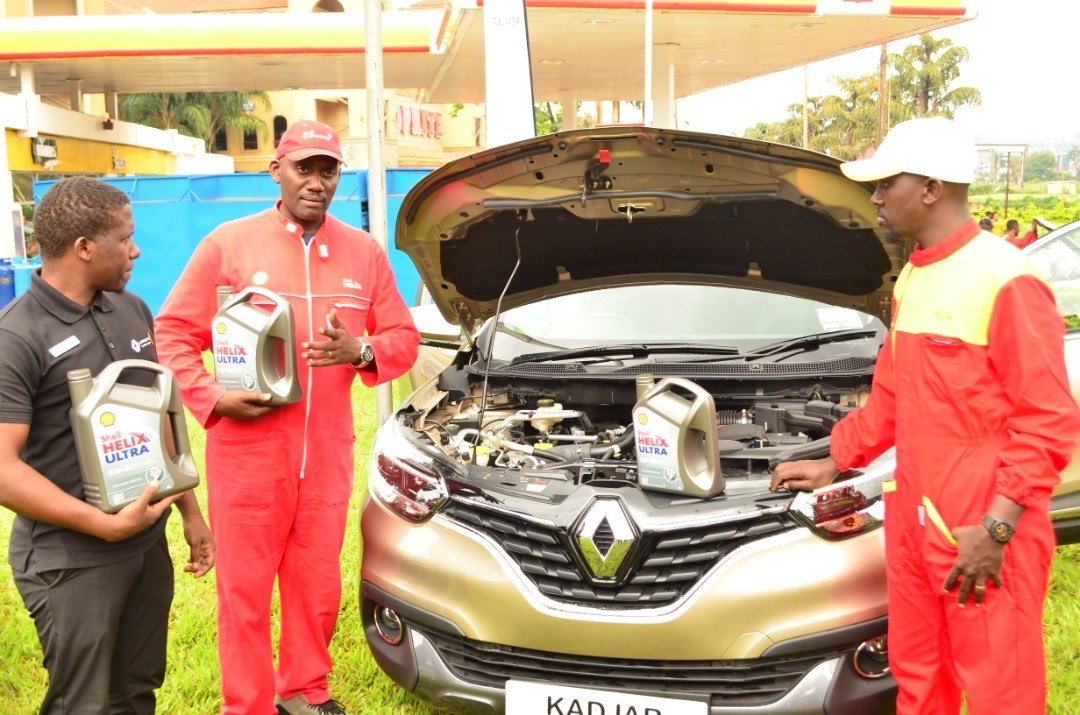 Initiated in 2017,shell helix has again returned for the 3rd time in a row to provide motorists with auto clinics at their nearest Shell outlets.

This time, with its partnership with Authorized car branded company Renault, the motorists will have their cars worked on by experts in the modern Engine technology.

Speaking at the launch of the Shell Helix auto clinics on Friday at Shell Bugolobi, Alex Tusingwire,Vivo brand manager Lubricants revealed that most of the motorists in Kampala and Uganda in general do not know the kind of oil that their engines require and the role it plays.

“The knowledge level on lubricants for motorists in Kampala and Uganda is extremely limited, most of the motorists who drive cars today, do not what role the oil plays in their engines and what grade of oil their engines are using.”

Tusingwire cited that the purpose of the auto clinics is to equip motorists with knowledge on different oils and the benefits they bring about to the engines.

“The main purpose for these auto clinics is to educate the motorists, let them know the kind of oil that they need to be using in their engines, its benefits and the value that it adds to the engines.”

Shell helix has a wide range of motor oils that are recommended for older engines, high mileage cars, most advanced engines and provides perfect performance in engines .they include such as Shell HX3 and shell helix ultra among others.

Shell is bringing franchised workshops in the market which have been authorized to sell branded vehicles by global car brand such as Renault,which is currently in the market and exclusively uses Shell helix motor oils to service their cars.

The Shell Helix auto clinics are also aimed at profiling how shell helix works and operates in the most modern engines and the benefits that it can lend, not only authorized branded cars, but most of the cars that are currently operated by private motorists in Uganda.

The partnership with Shell Helix is to allow Renault showcase its cars, revealing the advanced technology in the modern engines, appreciating the opportunity of working with shell helix and how it has helped them.

Started in Shell Bugolobi, the auto clinics will have over six different executions including in Kabalagala and shell Ntinda respectively.

According to Tusingwire,the auto clinics double as service clinics as the motorists will not only be learning about the different motor oils, but everything that one needs to know as far as cars are concerned.

Motorists will have chances of winning a wide range of goodies such as extra fuel, car freshener, meal at the restaurant and shopping vouchers among others for serving their cars and participating in the auto clinics.

Paul Kagansi, a mechanic and expert in car engines and lubricants, explained that Shell helix has the only oil that is converted from natural gas, having the ability to cleanse slug in the engines and keeps the engine protected from all forms of emissions.

“Ordinarily, most oils are converted from crude oil, but the Shell Helix comes with active plus technology, where a range of oils such as ultra hx7 among others, are converted from natural oils which are cleaner for the car engines.

He also that car like Renault highly recommends Shell helix on car Bulleting RN0700, RN0710 and shell helix ultra for the vehicle 5w30 due to its highest level of cleansing.

It is reported that high level and strong durable cars like Ferrari used in formula 1,BMW,Reanault and  Mercedes among others recommend shell helix oils.