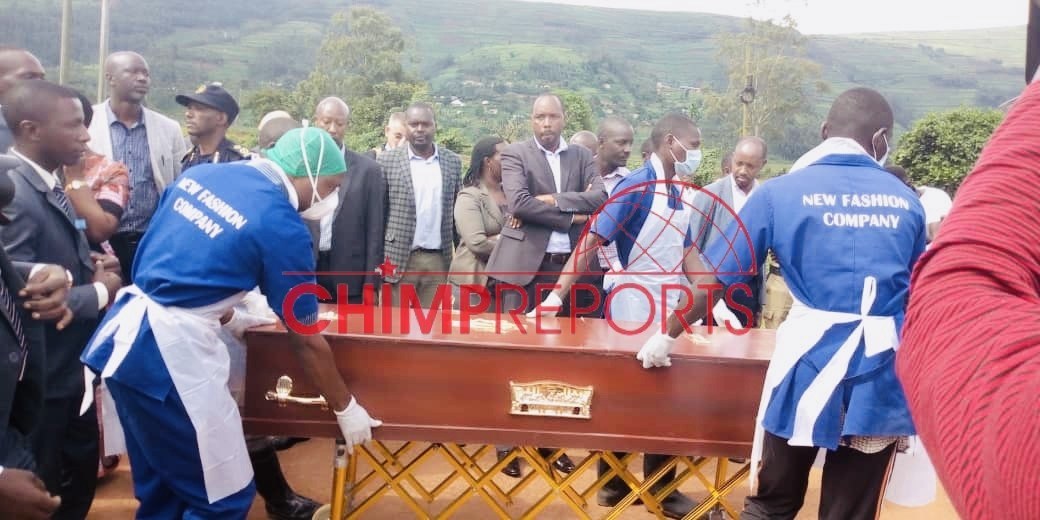 The body of John Baptist Kyerengye has been handed over by Ugandan authorities to Rwanda for burial.

The tense ceremony graced by diplomats from the East African region and countries which sit on the United Nations Security Council was held in the no man’s land at Katuna border.

Kyerengye was shot dead this past Friday by Rwandan forces inside the Ugandan territory; an act that attracted a protest note from Uganda’s Foreign Affairs.

There were some engagements among authorities from both sides before Rwandan officials led by Nyagatare Mayor David Mushabe crossed to the no man’s land to officially receive the body.

Uganda appears keen on showing what officials described as Rwanda’s aggressive conduct before the international community.

The Rwandan officials maintain Kyerengye was shot dead after he violently attacked an armed official inside Rwanda.

They, however, do not explain how the body ended in Uganda. A Ugandan was also shot in the fracas.

Mushabe told the media at the border that “Uganda should also accept responsibility in this tragedy. Both sides are involved in the problem.”

He said Rwanda appreciates “Uganda handing us the body of the deceased, but you should not stop at handing us the dead. I think it is better if you hand back to us other Rwandans being held at the various facilities in Uganda.”

Kigali maintains hundreds of its citizens are rotting in Ugandan jails and are routinely denied access to consular services, a claim Kampala denies.

But Mushabe today said, “The way you gave us this dead one, you should also give us the live ones. That, I think, will make us happy on both sides.”

She also called for vigilance and tightening of security on the Ugandan side of the border.

Kamusiime said Uganda used to maintain a barracks near the Rwanda border.

“If we had a barracks around there, may be this would not have happened,” said Kamusiime.

“We are now going to the crime scene at Kamwezi, to find out more about what happened. But that is a solution that we should explore,” she said.

Tensions between the two neighbours have worsened in recent months over espionage and counter accusations of supporting rival armed movements in the region among others.