Sheebah’s new song ‘Kimansulo ku mimwa’ is not about me, if it is about me then she has no idea who I am – Cindy 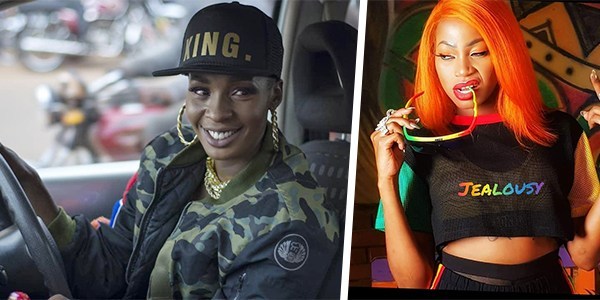 The King herself Cindy has come out to refute claims that Sheebah’s new song   ‘Kimansulo Ku Mimwa’ is about her. This is the second song fans are concluding that the Team No Sleep (TNS) artiste has dedicated to Cindy with the first song being ‘Jealousy, a song Sheebah released earlier this month.

Speaking on
a phone interview Cindy has said that when people told her that Sheebah had
released a new song dedicated to her, she listened to the song and didn’t find
anything in the song about her.

“I read
through the lyrics of the song and there was absolutely nothing about me but if
it is about me then she (Sheebah) has no idea who I am,” Cindy said.

Cindy
further said that she feels no need to reply to the song.  She however said she feels maybe Sheebah was
dedicating the song to somebody else.

“I am not
going to be bothered about something that doesn’t concern me because when I wrote
Copycat I definitely had a reason as to why I wrote it and the reason is in the
lyrics,” Cindy said.

In Sheebah’s
‘Kimansulo Ku Mimwa’ song, she sings of an envious person who keeps attacking
her because of her life achievements.