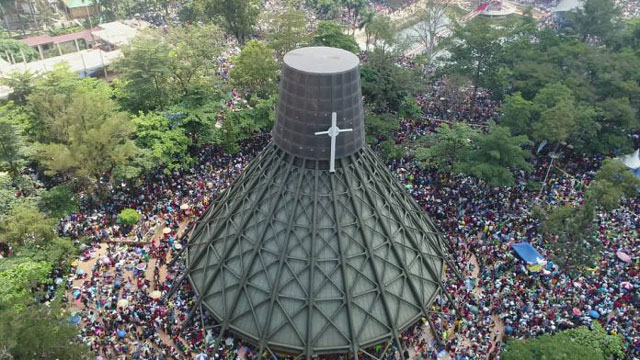 Kampala, Uganda | THE INDEPENDENT | A commuter taxi has knocked dead four Kenyan pilgrims and injured ten others critically along Iganga-Tororo high way. The accident occurred around 5:30am on Sunday morning at Waina village in Mayuge district.

The deceased Kenyan victims who were on their way to Namugongo Martyrs shrine have since been identified as Sarah Adiambo, Godfrey Abaga, Kevinah Akila, and Roselyn Mutunga.

Their bodies are lying at Iganga General Hospital mortuary pending postmortem. The deceased were part of 106 elderly pilgrims mainly from Bungoma catholic diocese in Bungoma County in Kenya.

She says they have launched a manhunt for the taxi driver who fled the scene shortly after the accident. She also urged motorists to be mindful of pilgrims.

The leader of the deceased pilgrims, Peter Sosso, says he is leading a group of elderly people who can only walk for 20kms a day and they had expected to stopover at Bugembe parish when the unfortunate incident happened.

Agnes Kibone, who is nursing wounds at Iganga general hospital, says she was shocked to see her colleagues perish in the accident in the middle of the early morning rain.

This is not the first time Kenyan pilgrims are being knocked on their way to Namugongo.

In 1998, a Kenyan pilgrim identified as John Kibe was knocked dead by a speeding taxi at Lwankima along the Jinja-Kampala highway on his way to Namugongo to celebrate Martyrs’ Day.

Kenyan Pilgrims hold special prayers in memory of Kibe annually as they walk to Namugongo shrines.