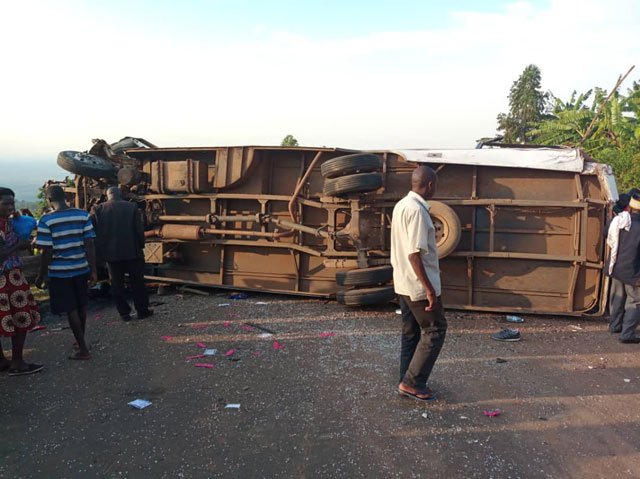 Kampala, Uganda | THE INDEPENDENT | The number of people dying in road accidents went up in 2018, according to the annual police crime report, released on Monday.  The report shows that accidents claimed 3,194 people during the year, slightly above the 3,051 deaths registered in 2017.

The number went up despite a reduction in road accidents from 13,244 in 2017 to 12,805 in 2018. At least 5,245 of these were recorded in the Kampala Metropolitan area, covering the districts of Kampala, Wakiso and Mukono.

The Kampala accidents claimed lives of 665 people, left 2,234 nursing serious injuries while 1,939 survived with minor injuries. The highest number of accidents was registered in December at 1,153 cases followed by July at 1,123 cases, March with 1,099 accidents while August and January tied at 1086.

The Major accidents of 2018 included the December 18 crash in Kapchorwa which claimed 24 lives. It involved a Hyundai Bus registration number UG 2838E belonging to Kiryandongo Technical Institute and which overturned at Tewei Hill. The other was at Nanda village in Kiryandongo district along the Kampala-Gulu highway, where 22 lives were lost and another 25 injured.

The post Road accidents claimed 3,000 lives in 2018 appeared first on The Independent Uganda:.