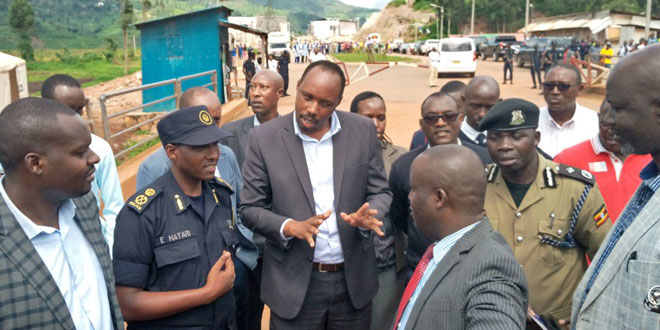 Katuna, Uganda | THE INDEPENDENT | There was drama at Katuna border in Kabale district on Monday at the handover of the body of a Rwandan national who was gunned down in Kamwezi sub county Rukiga district on Friday.

The handover ceremony was meant to take place in a tent  but Rwandan officials drove for about 80 meters inside Uganda, and declined to proceed to the venue. They asked the body be brought to where they are.

They brushed off attempts by the Ecega, Kamusiime and the Kabale LC V Chairperson, Patrick Besigye Keihwa to convince them to proceed to the venue prepared for the function that was about 150 metres away.

The Rwandan officials traveled to Katuna to pick the body of John Batista Nkyerengye, a resident of Nkoma cell in Ntabarwe parish in Nyakatere District. The team was led by Assistant Commissioner of Police-ACP, Emmanuel Hatari, the Eastern Province Regional Police Commander and the Mayor for Nyagatare district, Claude Mushabe.
The Ugandan delegation was led by Richard Ecega, the Kigezi region Police Commander and Caroline Kamusiime Muhwezi, the Rukiga District Woman Member Parliament.

Present were also representatives from the American, Russian, French and Burundian embassies in Uganda and the Tanzanian High Commission among others.

Hatari and Mushabe demanded that Ugandan officials hand over Nkyerengye’s body where they had stopped.

Caroline Kamusiime Muhwezi, the Rukiga District Woman Member Parliament who spoke on behalf of Ugandan authorities condemned what happened in Kamwezi, saying something must be done to end a feud between the two countries.

The Nyagatare District Mayor, Claude Mushabe welcomed the decision of Ugandan authorities to hand over Nkyerengye’s body and asked Uganda to release several Rwandese in its custody.

He cited the example of Bosoce Ishimwe and Peter Sanvura, both residents of Tabarwe in Nyagatare District who attached to Rwanda Defense Forces who were picked on Sunday on suspicion of espionage.

He also insisted that the late Nkyerengye was shot inside Rwanda’s territorial boundaries and not in Kamwezi as claimed by Ugandan authorities.

Gad Rugaaju, the Kabale Deputy Resident District Commissioner, said Rwanda must restrain its soldiers from crossing to Uganda. He disclosed that his office has already registered five cases where Rwandan soldiers crossed to Uganda with guns.

Later Ugandan officials headed to Kamwezi Sub County in Rukiga district to handover the body of Alex Nyesiga Atuheire, the Uganda national who was gunned down together with Nkyerengye by unidentified Rwandan soldier on Friday evening while pursuing a suspected smuggler inside Uganda’s territory.

Rwanda closed its borders with Uganda on February 27, 2019 to purportedly expedite the construction of the single customs at Gatuna border.  Rwanda advised truck drivers destined to Kigali to use Kagitumba border via Mirama Hills.

However, Rwandan officials including President, Paul Kagame later accused Ugandan authorities of abducting its citizens and locking them up in ungazetted areas.

Rwanda also accused Uganda of hosting and facilitating dissidents especially Rwanda National Congress-RNC and the Democratic Forces for the Liberation of Rwanda FDLR, which have declared war on the Kigali government.

Rwanda advised its citizens against travelling to Uganda, saying it can’t guarantee their safety.  Rwanda also deployed security officials and destroyed all temporary bridges to bar Rwandans from crossing to Uganda.

Despite the border closure and warnings Rwandans continue to cross to Uganda using porous borders to look for food stuffs and goods.