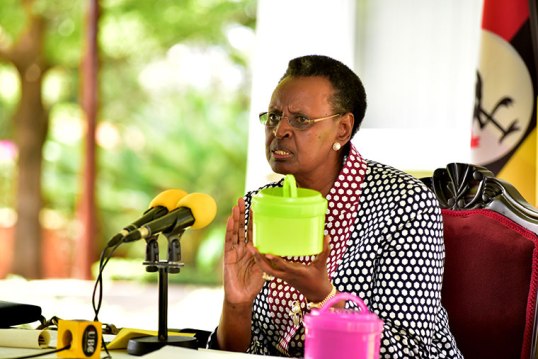 Janet Museveni says Youth who fail to get employed are simply lazy fellas who fail to diversify the scope of Labour they are willing to engage in and then they keep looking for white collar jobs when there other kinds of jobs they could do.

But as facts will show, the First Lady seems to be detached from reality! The jobs she talks about are for a selected few whose families hold status in this country.

She goes ahead to claim that the blue collar jobs are the way to go. However, even when one decides to go self-employed, the taxes imposed by the NRM government are chocking many businesses and start-ups. It has been said that Uganda is one of the most entrepreneurial countries but most businesses don’t even live to see their first birthdays.

The First Lady further claims that most children have their tuition fees paid by parents who farmers are getting the money from the sales of crops and animals. She ignores the fact that by the time many complete university and other tertiary education, their families are chocking on debts.

Mama Janet Museveni, before you conclude that the youth are lazy, we advise that you get your facts right. Do not look at youth unemployment in exclusion of mitigating factors like the rising cost of living in the country (including of education and other social services), the cost of capital and finance, and widening taxation of citizens. The Government of Uganda decided to impose an Over the top Tax (OTT) that has affected many youths who have recently taken advantage of the internet and social media to run small businesses and tap into global opportunities. When Bobi Wine and other activists opposed this tax, their pleas were met by the fury of the baton and gun.

We have also seen how government has treated a musician whose only crime is to speak against the injustice of NRM. Bobi Wine and his Fire Base Entertainment crew can no longer ploy their business in peace. How can the government you claim cares for the youth be the very one that puts them down?

In as much as you claim to write as a mother of the nation, we find that your views on many issues are flawed and come from a point of privilege Mama Janet Museveni.