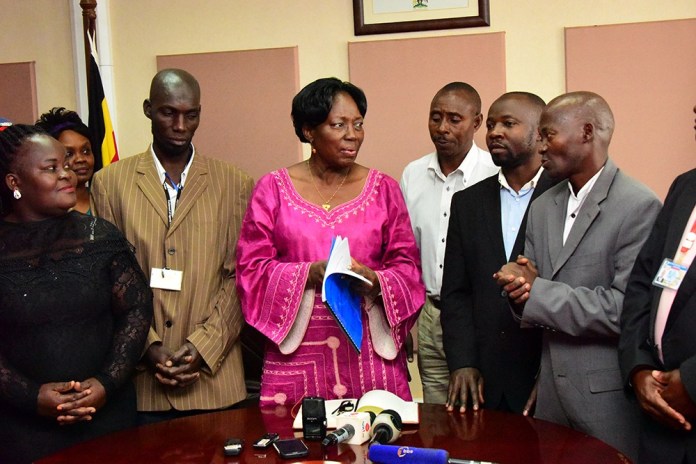 In a meeting with the Fuba Tukole Kampala District vendors and Hawkers, The speaker of Parliament put a notice on KCCA over the persistent allegations of harassing vendors.

While speaking to the vendors Kadaga faulted KCCA for dragging its feet on renewal of licenses making vendors vulnerable to brutal and degrading arrests.

The declaration to sort the KCCA mess emphasizing that  vendors have the right to work left a relief on the vendors faces.

However Emmanuel Tebajjukira, the associations Public Relations officer said that parliament should set up a committee to ensure that KCCA follows the law in its operations because vendors have been beaten, harassed, wrongfully arrested and even some of our colleagues lost their lives.

The vendors also invited Kadaga for a field visit to their places of work which they said will give her an insight and first-hand experience to witness the duress working conditions KCCA puts them under.

Since the initiation of KCCA, confrontations between law enforcement officers and vendors have characterized much of the city’s ugly scenes, resulting into loss of life some times.

This conflict has equally ruined relations between KCCA technocrats and politicians, whose climax was the resignation of pioneer KCCA Executive Director Jennifer Musisi.

Despite the work of KCCA is doing, while meeting teachers who were also striking over pay, President Museveni criticized Ms Musisi and KCCA staff for drawing huge salaries yet, they had failed on the job of cleaning up the city and winning him the majority vote.

One thought on “Stop harassing Vendors- Kadaga tells off KCCA”