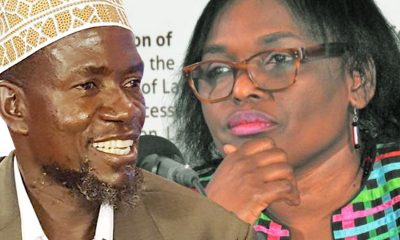 Speaking to our sources, Imam Kasozi stressed how embarrassing it is that the head of state awarded heroic medals to security officials who blocked Bamugemereirwe and her commission from accessing a contested land on Mutungo Hill.

What was the motive of this gesture?

The IUIU don revealed that Bamugemereire was appointed to find a lasting solution to Uganda’s land conflicts popularly characterized by illegal land seizures and evictions. She was also tasked to deal with the impunity of gun wielding individuals who were terrorizing and evicting people off land illegally.

What has now changed?

Various investigations and interventions that have been carried out by Bamugemereirwe and her commission have unearthed often times a big connection between land evictions and individuals close to the President and state House. In some cases, the President’s brother Salim Saleh has also been implicated in several scandals.

We therefore ask, has the appointing authority realized that Bamugemereire is unearthing dirty linen of Museveni and his cronies? Have her investigations hurt Museveni’s image rather than helped it?

Imam Kasozi also revealed that the plot to humiliate and embarrass the Lady Justice was planned a long time ago and the architects of the plan first sent the Deputy Attorney General to embarrass her commission.

The epitome of this humiliation has however been the awarding of medals of heroism to the soldiers who defied Bamugemereirwe live on air.

In embarrassing Bamugemereirwe, could the president have embarrassed himself instead?

Former Buganda minister, Israel Mayengo, also condemned Museveni’s character of embarrassing people who fight for poor Ugandans.  He also noted that most times when a president over stays in power, the people next to him do things behind his back that could hurt him.