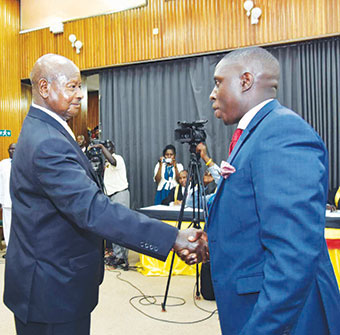 Kampala MP Muhammad Nsereko will forever be that Yellow Prodigal Son who left his Father’s Yellow Nest with a target of accomplishing his Father’s Yellow Mission. Honorable confuse nobody; leopards never change spots and more so in this political game.

Having good political ideas and convincing others that your ideas are as good as you think isn’t enough. What really matters is your ability to navigate your political apparatus to the voters who put you into office, and make no mistake, everyone has his/her own political tricks but how those tricks are put to work matters. Politics isn’t a matter of sleazy double dealing and voters are pawns in a game of Chess.

It’s no secret that Hon. Muhammad Nsereko’s Political BIRTH was through NRM and that he still has NRM’s soft spot for a softer landing for his soft politics. Hon. Robert Kyagulanyi aka Bobi Wine and People Power at large isn’t into Nsereko’s soft politics of confusion. No, not at all.

People Power has come a long way and its main objective is to awaken the masses, countrywide, over their rights as citizens and it has gained the support of people, not by confusing them, but by having a clear mind and out right conscience, siding with political figures who have that ability of putting their political ideas into practice; something that Muhammad Nsereko has failed to accept and may be, to understand. After all, it takes skill and loyalty to have a group of people working together and sharing their ideas in harmony to pull off a successful project.

We all know the demand from an opponent that he or she should address more and more points after an initial counter-argument is just like refusing to concede or accept an opponent’s political milestone. It’s part of African politics and Hon Nsereko is not different; but ever since Hon.Kyagulanyi’s elder brother, the renowned Chairman Fred Nyanzi, made his intentions clear to stand for Kampala Central MP in the coming 2021 elections, things changed.

The Honorable member of Parliament in the constituency lost his calmness and cool attacking everybody and every plan under People Power. Hon Muhammad Nsereko has fast forgotten that in life and history in general, what goes around comes around, and during the 2016 Kampala Central MP elections he used unfair tactics and part of the state machinery against Hon Robert Kyagulanyi’s other brother Eddie Yawe to win an election. A feather may not be seen as “heavy” to anyone, but that doesn’t mean its “lightness” is still not relative to other objects.

In his Facebook bitter live video over the weekend Nsereko tried very much to water down the influence and objectives of People Power attaching hooliganism to its drive, and unless he gives more clearer views in future with a more calm mind, this was depicted as jealousy towards the young Hon. Robert Kyagulanyi and People Power, countrywide. Hon.Robert Kyagulanyi is a nationwide effect beyond Nsereko’s Kampala Central Mp-ship thinking. Where Uganda has reached anything not objective towards stopping this regime under Yoweri Museveni’s dictatorship is seen as negativity in all possible ways because the country is at a meltdown.

Sometimes it’s good to know and understand who calls the shots in politics. Worldwide it’s the voters who cast their votes under proper democratic lines. Other times, it isn’t the voters; like in the case of dictatorship regimes. It’s very sad that the voices of the people are always neglected and that’s where Uganda is mapping currently under Yoweri Museveni’s rule.

People Power preaches that it’s no longer the people with the flashiest titles and highest offices who are setting and shaping the political arena right now in this country but instead, it’s the VOTERS who are the key people beyond people in Power. People like Hon.Muhammad Nsereko who think that they can influence people’s choices using improper access to their minds are mistaken; that’s not Uganda anymore.

Ugandans are WISER and more AWAKENED!!