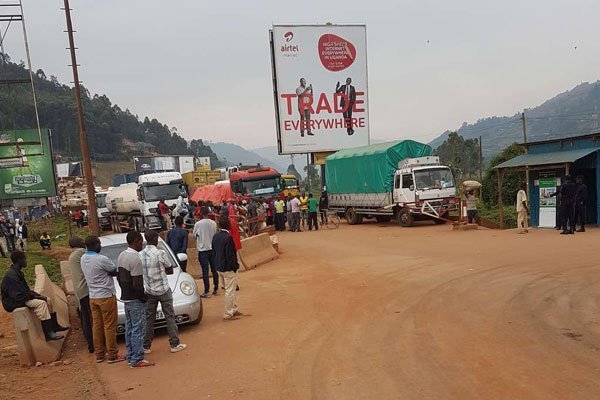 Rwanda has for the second time bolted its borders with Uganda at  Gatuna after it was reopened 12 days ago,

Earlier this month, the Rwanda Authority announced that the border had been opened for trucks to cross in to Rwanda after its initial close in February this year on pretext of repairs.

Our sources  report that even with the temporary opening, some traders found it difficult crossing the border and fewer trucks were allowed to go through after extreme interrogation.

The Katuna border weekly market known as “World Market” inside Uganda was poorly attended and there was remarkable absence of Rwandans, who are usually the major customers.

On June 19, Uganda Revenue Authority (URA) installed a mobile cargo scanner at Katuna Border post to ensure there are no illegal declarations.

Despite  opening the Katuna border temporarily, Rwandans were still not allowed to Cross to Uganda on claims that their security is not guaranteed much as Ugandan traders had the option to use Kayanika and Kagitumba border posts to cross into Rwanda.

However ever since the close of the Katuna border, Uganda has lost more than $664 million’s worth of exports to Rwanda while Kigali has lost $104 million during the three months, according to Uganda’s East African Community Ministry