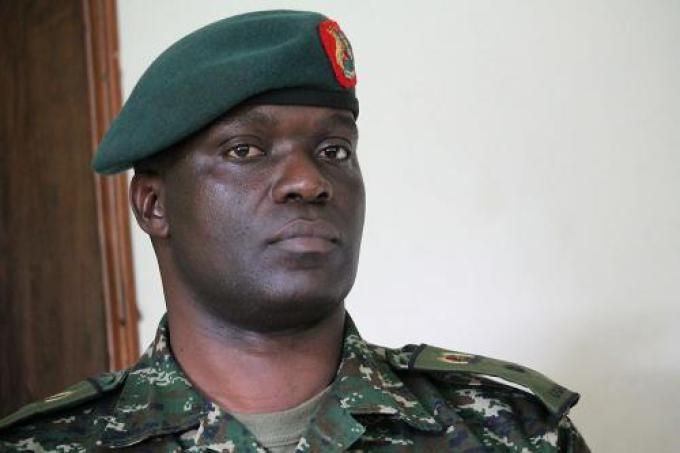 The Director Strategic Communication at the Chieftaincy of Military Intelligence (CMI) Col. Ankunda while speaking at an Anti-torture conference today morning, said that Kyadondo East Legislator, Robert Kyagulanyi, popularly known by his musical stage name, Bobi Wine, was not tortured by the army in Arua last year

He defended the actions of the army on August 13, 2018, when the legislator, together with fellow MPs and journalists were arrested for allegedly pelting the presidential convoy with stones during a by-election campaign.

“I visited the Hon. Kyagulanyi when he was detained at Makindye Military Barracks and in my view, I cannot conclude that he was tortured,” the former UPDF spokesperson said to the amusement of the audience.

The Arua saga left a tortured Bobi wine unable to walk on his own and Hon. Zaake struggling for life as they had to seek for specialized treatment in the US and India respectively and a one Yasin Kawuma who was shot dead. The two opposition members of parliament were arrested together with 33 others and charged with treason

Ankunda’s remarks did not sit well with Bobi Wine’s lawyer who also doubles as Bugiri Municipality MP, Asuman Basalirwa, one of the two people that were allowed to access Bobi Wine the day he was first paraded before the Court Martial in Gulu.

“I was one of the two Ugandans, the other being Hon. Medard Ssegona, that were allowed to see Bobi Wine when he was flown to Gulu for Court Martial. He was in an isolated room with arms and legs cuffed, bearing wounds all over the body. That is why they could not allow the media or his immediate family anywhere near him,” he recounted.

Torture has become the order of the day among security agencies such as CMI, UPDF, ISO, Police and the SFC with records provided by the Uganda Human Rights Commission showing that over 15,000 cases have been reported against these forces in the last five years.