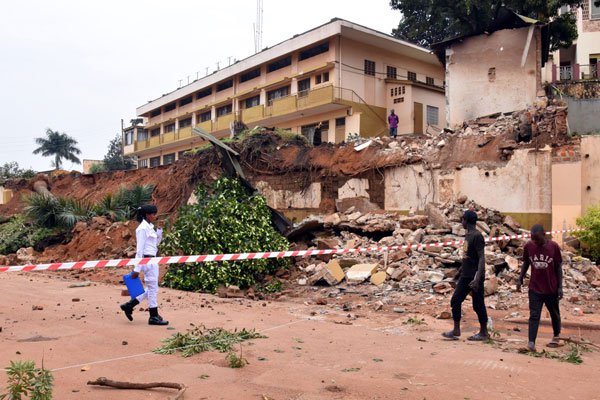 According to the school Headmaster Mr. Mutebi, who addressed journalists yesterday at the scene, the school had sealed off the wall and warned motorists against parking nearby because it had developed cracks.

“We wrote to KCCA about our plans to demolish that collapsed wall so that we could erect a new one but they did not. We were still waiting for clearance until it finally collapsed this morning [yesterday]. We can’t therefore be held responsible,” he said

KCCA through the Directorate of physical planning is required to regulate development across the city which includes issuance of development permits such as job cards, hoarding, chain link, renovation, demolition, excavation, occupation, telecom masts, and building inspection.

KCCA was urged to always ensure responsiveness in cases where one wants to develop their land.

However, when asked about Mr Mutebi’s claim, the physical planner for Kampala Central Division, Mr Villey Agaba said KCCA was planning to demolish the wall. Mr Agaba attributed the collapse of the wall to rain.

“We have now decided to demolish the entire boundary wall for fear of re-occurrence of the same tragedy because it has since outlived its usefulness,” he told our source in an interview yesterday.

Asked about why the city still has old structures, Mr Agaba said they have since earmarked old buildings for demolition. He, however, implored members of the public to always alert authorities in case they identify any old structure.

Kampala Metropolitan police spokesperson Patrick Onyango confirmed the death of the six children and two causalities and said they were working with KCCA to prepare for their burial.

Mr Onyango identified the deceased as; Frank Ojula, Brian Ogwal, Bonny Omara, Richard Odong, Ivan (other name not known) and one unidentified child of Kenyan nationality while the injured are Kennedy Okello and the other identified as only Okello.

The injured, Mr Onyango said, are admitted to Mulago hospital.

Yesterday afternoon, people were still thronging the place to witness the demolishing the remaining wall.

Yesterday’s tragedy brings the number of people, whose death has been caused by collapsed walls to 15 in a space of two months.

Out of nine people who died last week, seven were from Seguku while two were in Namasuba in Wakiso. The other two died from Namirembe Guest House in Rubaga Division when the roof of the guest house collapsed.

William Mujasi, one of the boda boda cyclists, who operates at Pride Theatre stage said the deceased were regular at their stage, adding that they usually did manual jobs.

“When we reached the scene, we were stranded at first because it was hard to retrieve the bodies. We later managed to retrieve two dead bodies until police came. A bulldozer was later brought to clear the debris under which the boys were buried. It was harrowing to see bodies of the young boys whom we knew, lying lifeless,” he said.